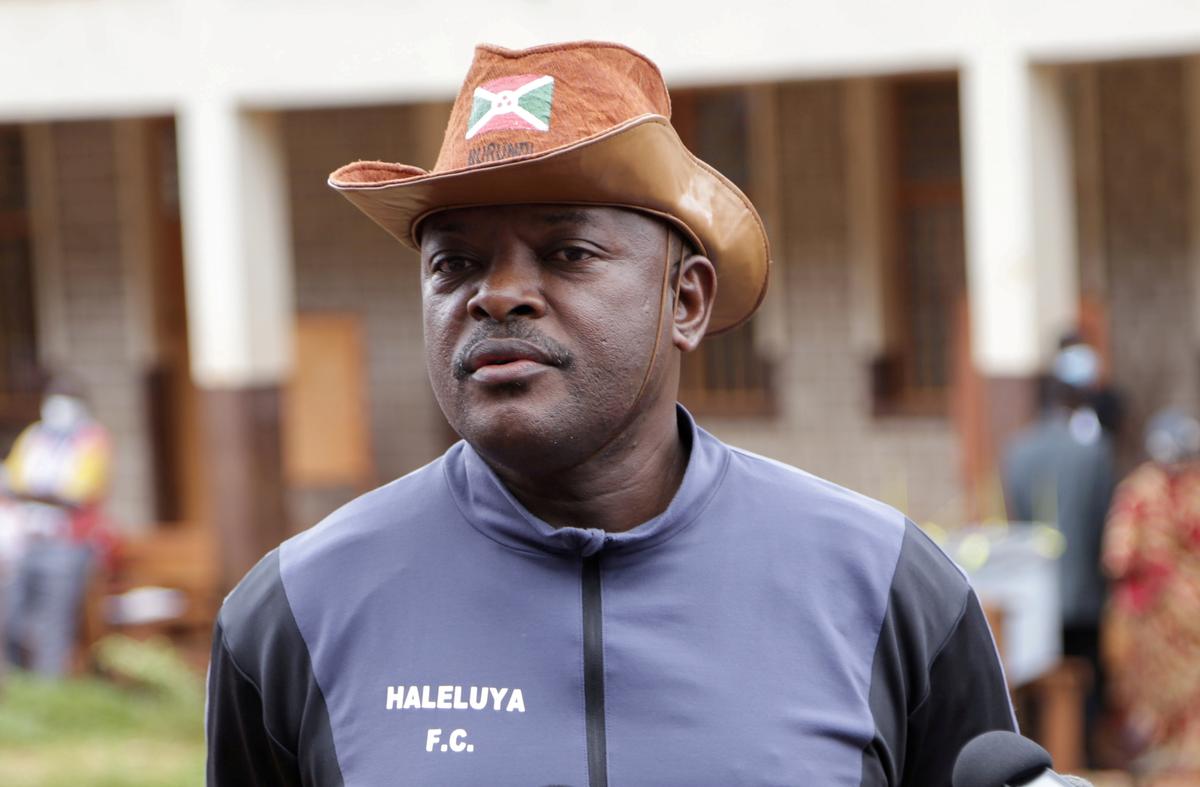 NAIROBI (Reuters) – President Pierre Nkurunziza, a fitness enthusiast who increasingly relied on religion and repression to rule the impoverished and unstable central African nation of Burundi for 15 years, has died, the government announced on Tuesday.

FILE PHOTO: Burundi’s President Pierre Nkurunziza talks to the media after casting his ballot at a voting station during the presidential, legislative and communal council elections, under the simmering political violence and the growing threat of the coronavirus disease (COVID-19), in Ngozi, Burundi May 20, 2020. REUTERS/Clovis Guy Siboniyo

He leaves behind a nation dotted with the unmarked graves of his political opponents, an economy in tatters and a question mark over whether infighting over his succession could divide the country’s powerful generals and security chiefs.

Burundi is largely cut off by international donors after the United Nations documented the widespread rape, torture and murder of political opponents by ruling party activists and the state security forces. Independent journalists are largely in exile or in jail.

Nkurunziza, who was 55, was due to stand down in August, when retired general Evariste Ndayishimiye, who successfully stood for the ruling party in last month’s elections, was due to take over. The opposition said the elections were marred by rigging and violence, charges rejected by the constitutional court last week.

Nyabenda is a civilian who became the president of the national assembly. Nkurunziza planned to remain active in politics as “Supreme Guide of Patriotism”, a title that came with a 1 billion Burundi franc ($535,000) pension and retirement villa.

But other generals successfully lobbied for Ndayishimiye to stand in May’s elections. Like Nkurunziza, he is a former militia leader from the Hutu ethnic group.

Burundi’s constitution says Nyabenda is now supposed to take over until his former rival Ndayishimiye starts his seven-year term at the end of August.

“Despite the clarity of the constitutional path, there is a risk of infighting within the CNDD-FDD (ruling party) because different generals supported different candidates during the ruling party primaries in January,” said van de Walle.

Burundi became diplomatically isolated after 2015, when Nkurunziza’s decision to run for a third term – a move his opponents said violated the peace deal that ended the civil war – sparked protests met with extreme violence by the youth wing of the ruling party, known as the Imbonerakure, and the security forces. Hundreds of thousands of Burundians fled into exile.

Burundi withdrew from the International Criminal Court in 2017, shut down the United Nations office on human rights last year, and expelled the representative of the World Health Organisation last month amid criticism of the government’s handling of the coronavirus pandemic. It has carried out very few tests and held large rallies during the election period.

“As I learn of the passing of Pierre Nkurunziza, I think of the thousands of lives that his regime cut short. The families that won’t see justice,” tweeted Thierry Uwamahoro, a democracy activist and prominent government critic who lives in exile.

Journalists and human rights workers are routinely targeted. Last week, four journalists from the domestic news website Iwacu were sentenced to two and a half years in prison after they travelled to investigate reports of unrest in the northwest of the country.

It was unclear exactly when Nkurunziza died. The government statement said the president, a keen sports enthusiast often photographed playing football, watched a game of volleyball on Saturday but fell ill that night and was taken to hospital in Karuzi in central Burundi.

His health improved on Sunday but “surprisingly, on morning of Monday June 8, 2020, his health suddenly deteriorated and he had a heart attack”.

Doctors provided “cardiopulmonary resuscitation” for hours but were unable to save him.

The statement asked people to remain calm and announced seven days of mourning.

“The government of the Republic of Burundi announced with great sadness … the unexpected death of his Excellency Pierre Nkurunziza, President of Burundi,” the statement said.