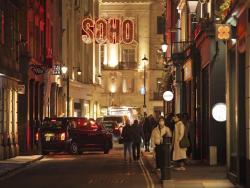 LONDON (AP) — Officials have warned revellers in Scotland and Wales to think twice before travelling to England to ring in the new year, highlighting how the four parts of the United Kingdom were again taking starkly different approaches to coronavirus restrictions amid record-high infections and soaring hospitalisations.

Prime Minister Boris Johnson has resisted tightening restrictions in England despite the rapid spread of the highly transmissible omicron variant, instead focusing on frequent self-testing and an expanded vaccine booster program to control the spread of infections.

Meanwhile, Scotland, Wales and Northern Ireland, which set their own public health rules, imposed new restrictions this week that closed all nightclubs and limited social gatherings. Bars and pubs have had to return to table service only. In Edinburgh, which traditionally hosts one of Europe’s largest New Year’s Eve parties, people have been urged to stay at home.

While no formal travel ban is in place to stop Scottish party-goers from making their way to England on Friday, Scotland’s deputy leader John Swinney said travelling would be the “wrong course of action.”

Opinions have been divided on whether Johnson’s Conservative government was taking a risky gamble in not enforcing tougher coronavirus measures in England as the omicron variant drove infections to record high numbers.

About one in 25 people in England — or about two million people — had COVID-19 in the week before Christmas, the Office of National Statistics estimated Friday. That figure jumped to 1 in 15 in London, the capital, the body estimated.

Figures released Thursday showed the number of people hospitalised with COVID-19 in the UK jumped to 11,898, up 44% from a week earlier. Confirmed new daily cases hit a record of 189,213 on Thursday, and the government reported 332 deaths, the highest figure since March.

While the data is patchy due to delays in reporting over the holidays, the figures suggest there have not been large numbers of seriously ill patients.

“Although the numbers are going up and going up increasingly rapidly, the absence of large numbers of seriously ill older people is providing significant reassurance,” Chris Hopson, the head of NHS Providers, told The Times.

But immunologist and government scientific adviser Peter Openshaw warned that while UK hospitals haven’t yet reached the “threshold” of being overwhelmed, “it looks like that will be reached quite quickly.”

Johnson has urged people to take a rapid coronavirus test before going out and meeting with others on Friday or to celebrate outdoors if possible. While firework displays have been cancelled in London for the second year in a row, many parties were going ahead and many revellers were still expected to turn out in the capital later in the day.

Some believe Johnson’s strategy is risky and that large crowds gathering indoors for New Year’s Eve will likely lead to a further rise in infections.

“It is quite risky, given the fact we’re now approaching 200,000 cases per day –- there is a high rate of infection in the community,” Dr Azeem Majeed, head of primary care and public health at Imperial College London, told Times Radio.