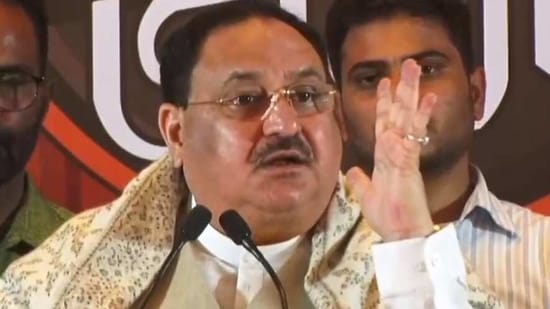 BJP chief JP Nadda accused the Bengal government of depriving the people of the benefits of central schemes like the PM Kisan Samman Nidhi and Ayushman Bharat.

The Bharatiya Janata Party’s (BJP’s) national president JP Nadda on Saturday accused the ruling Trinamool Congress (TMC) government in West Bengal of working with a criminal instinct and said it has institutionalised corruption in the state. To take a jab at the Mamata Banerjee-led government, Nadda referred to the attack on his convoy in the state’s South 24-Parganas district in December last year at Shirakol in Diamond Harbour, the Lok Sabha constituency of Abhishek Banerjee. Abhishek is the chief minister’s nephew. “The point-blank attack on a protectee like me is a testament to the state of law and order to which a regular citizen is subject,” he said.

The BJP had said some of BJP’s senior leaders, as well as workers, sustained injuries after being assaulted by the state’s ruling Trinamool Congress at Shirakol on December 10. Nadda, who visited Diamond Harbour as part of his two-day trip to the state, had said then that West Bengal had plunged into a state of lawlessness, and appealed to BJP workers to ensure the party’s win in the upcoming assembly elections.

The BJP chief, while speaking to reporters in Bardhaman about the welfare schemes for farmers in the state, accused the state government of depriving the people of the benefits of central schemes like the PM Kisan Samman Nidhi and Ayushman Bharat. “Kisan Samman Nidhi scheme is not applicable in Bengal. Around 26 lakh farmers have registered themselves for the scheme, for which Mamta didi has not given permission. The Prime Minister wants to give respect to farmers, wants to help them, but Mamta Di has become a hindrance in this,” he said.

Earlier in the day, Nadda launched the BJP’s first campaign for farmers in poll-bound West Bengal’s East Burdwan, which is considered the state’s rice bowl. He defended the three contentious farm laws enacted in September last year, saying they will enable farmers to set the prices of their products and choose the buyers even as the legislation has triggered protracted protests.

“Since the BJP came to power at the Centre [in 2014], Prime Minister Narendra Modi has made a six-fold increase in the central budget for farmers. He implemented the minimum support price [at least 50% more than the weighted average cost of production] recommended by the Swaminathan Committee,” Nadda added.