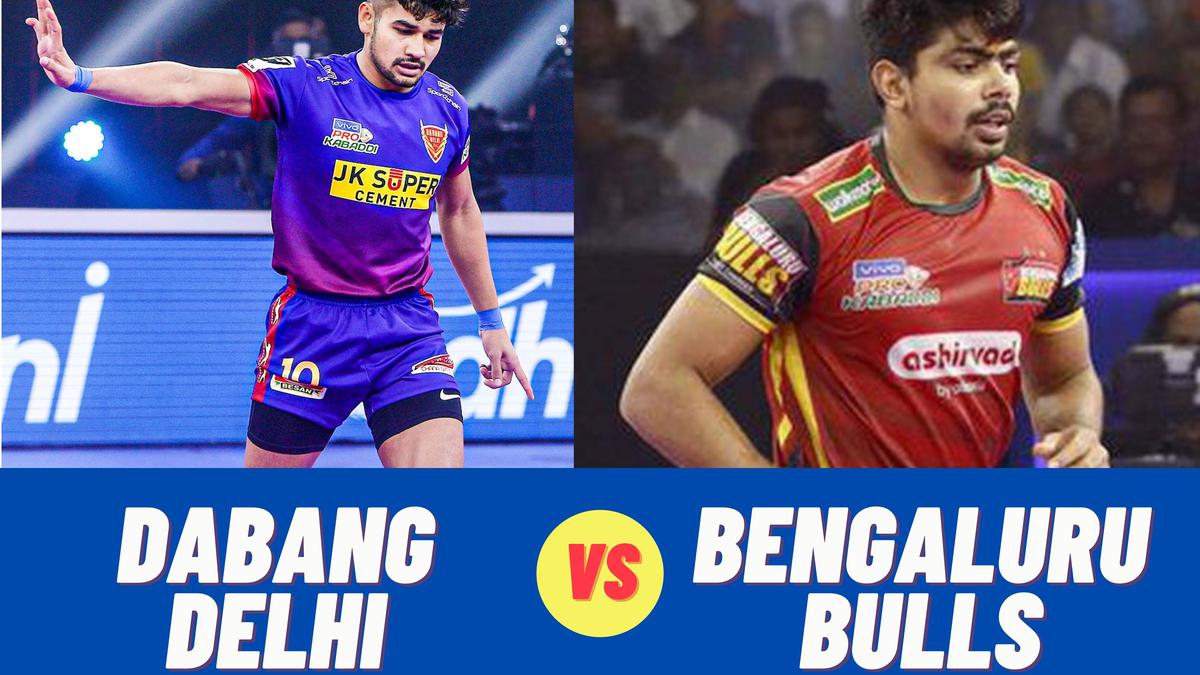 Welcome to Sportstar’s coverage of the Pro Kabaddi League. This is Shyam Vasudevan and I will be taking you through today’s PKL 8 match between Dabang Delhi and Bengaluru Bulls.

That brings us to the end of our Pro Kabaddi League coverage for the day. We will be back tomorrow. See you then!

Meanwhile, you can also check out our Kings of Kabaddi series from PKL 7  – a happier time pre-COVID when we got to physically sit down with some of the biggest names in the league and hear their stories. You can check out all episodes here:

In what was one of the most lopsided games in PKL history, Bengaluru Bulls produced a clinical show to demolish Dabang Delhi and earn a commanding 61-22 victory. Bengaluru Bulls’ 39-point win is the second-biggest win ever in PKL. Pawan Sehrawat single-handedly took the Dabang Delhi defence apart as he scored a stunning 27 points, six more than what the entire Dabang Delhi team managed.

Dabang Delhi was listless without Naveen Kumar, who has been the league’s best raider this season. Dabang Delhi’s raiders in Vijay and Ashu had little to offer, while the defence consisting of veterans such as Jeeva, Manjeet and Joginder was woeful.

This is Dabang Delhi’s second loss on the trot, after is suffered a 28-30 defeat to Jaipur Pink Panthers yesterday. Today’s loss, without a doubt, will serve as a rude jolt and exposed just how dependant the side is on the 21-year-old Naveen. It will be interesting to see how coach Krishan Hooda manages to get his boys together ahead of the next game.

The win takes Bengaluru Bulls to the second spot, while Dabang Delhi remains third for now on the PKL points table.

FULL-TIME! Bengaluru Bulls claims the second-biggest win in PKL’s history as it earns a 39-point victory over Dabang Delhi.

22-61 Ashu grabs a point as he skips out of Chandran’s tackle.

21-61 That’s a rare tackle point for Dabang Delhi – Malak does well to trap Bharat with what looked like a bear hug.

Dabang Delhi seems to have an injury – Mohammad Malak comes in for Joginder Narwal.

20-60 Pawan has been tackled for the first time in what seems like an eternity! But knowing how good the Bulls defence has been today, he should be back on the met in no time.

19-60 ALL OUT! This is the fifth All Out of the evening as Bengaluru Bulls now has a humongous 41-point lead.

18-56 Pawan gets to the mid-line easily as he wriggles out of Sandeep’s tackle and he’s scored 27 points now – the most anyone has managed this season.

Pawan is undoubtedly one of the best players in PKL. He’s been the top-scorer and best raider over the last two seasons and also holds the record for the most points in a game. Can you beleive he almost quit the sport before he joined Bengauru Bulls?

17-54 Ajay is taken out by the Bengaluru Bulls defence yet again…he’s managed only three points in six raids.

17-52 Pawan picks up a bonus and a touch on Ashu and he’s taken his evening’s tally to 24 points! Pawan’s having a whale of a time here.

17-50 ALL OUT! There’s nothing Dabang Delhi can do to make a comeback here. They’re trailing by 33 points.

17-47 Ashu attempt a leap over Chandran but he meets a fine tackle from Saurabh. Bengaluru Bulls has a 30-point lead now – the biggest we have seen all season.

16-45 Ajay is way too slow there and gets taken out by the Bulls defence in quick time.

16-44 Pawan shines with a super running hand touch as he runs deep into the right corner to eliminate Sandeep. That’s 20 points for Pawan!

15-43 This pretty much sums up Dabang Delhi’s evening – Joginder steps off the mat to gift Bengaluru Bulls a free point.

15-42 Ashu was eliminated in the last raid by Pawan and now Vijay is taken out by the Bulls’ defence. Nothing seems to be going Dabang Delhi’s way today.

Dabang Delhi has been absolutely woeful today. The defence has been at sixes and sevens while the raiders have simply failed to fire. That tells you just how important Naveen is to this team.

14-39 ALL OUT AGAIN! Bengaluru Bulls have inflicted another All Out on Dabang Delhi and the Bulls now have a massive 25-point lead.

13-36 Jeeva gets a trip to the bench as Pawan drags him to the mid-line.

12-34 Ajay Thakur goes in for the do-or-die raid and stands no chance against the seven-man defence.

12-33 Brilliant work from Bharat as he gets the better of both the Narwals in the Dabang Delhi camp – Sandeep and Joginder.

12-31 Pawan makes the rare error but still picks up two points! He gets the bonus and thinks he has a touch on Sandeep and enters the lobby. However, he does not manage the touch but is gifted a point as Vijay enters the lobby.

11-29 Pawan begins the second half in fine fashion as he skips past Jeeva’s dash and picks up a bonus point as well.

HALF-TIME: Bengaluru Bulls is in some mind-blowing form as it has demolished the Dabang Delhi side and taken a 16-point lead at the interval. Pawan Sehrawat as already scored 11 points, while Saurabh, Chandran and Bharat have all chipped in with the points. Dabang Delhi has looked toothless in Naveen Kumar’s absence and might be heading towards a landslide loss.

11-27 ALL OUT! Bengaluru Bulls inflicts the second All Out of the first half as Ajay Thakur is tackled off the mat.

10-24 Pawan gets the better of Ashu and Dabang Delhi is down to one man.

9-23 SUPER RAID! Pawan runs riot as he gets three of Dabang Delhi’s most experienced defenders – Jeeva, Manjeet and Joginder. That brings up Pawan’s SUPER 10!


9-18 Ajay picks up his first point of the evening.

Dabang Delhi has looked lost without Naveen Kumar as neither Vijay nor Ashu have managed to make an impact so far.

8-17 ALL OUT! Bengaluru Bulls have inflicted the All Out and storm to a comfortable nine-point lead.

7-14 Pawan simply leaps over Sushant Sail and reduces Dabang Delhi to one man. You don’t call Pawan the Hi-Flyer for nothing!

6-13 Joginder attempts an ankle hold on Pawan, but to no avail. The Dabang Delhi skipper has to jog back to the bench.

6-12 What a game Saurabh is having! He simply shoves Ashu off the mat.

6-11 Ajay is off the mat without having a chance to raid as Bharat gets a running hand touch on him.

6-10 A Dabang Delhi raider is brought down in a do-or-die raid yet again! Saurabh does very well to cut off any escape route for Vijay.

Ajay Thakur has come in for Dabang Delhi!

6-9 Joginder Narwal joins the party as he wrestles Pawan to the mat.

Dabang Delhi have a veteran raider on the bench in Ajay Thakur. With Neeraj picking up quite a few knocks here, Ajay might just come on soon.

5-9 Jeeva makes the tackle a little too soon and Pawan, who just came off the bench, bags a point.

5-8 SUPER TACKLE FOR BENGALURU BULLS! Mahender draws Neeraj deep into the left corner and Shubham swoops in to make the tackle.

Bengaluru Bulls are down to three men but have managed to hold on so far.

5-5 Ashu does well to deliver on the do-or-die raid as he gets an easy touch on left corner Aman.

The big news of the day is that Naveen Kumar is not playing for Dabang Delhi today. The youngster has been the best raider this season, but had his Super 10 streak snapped by Jaipur Pink Panthers yesterday.

4-3 That’s a solid tackle from Mahender. He anticipates Ashu’s run and gets him with a fine double thigh hold.

3-2 Neeraj Narwal grabs a point but ends up twisting his ankle on the way. That looks painful!

2-1 Pawan picks up a bonus point in his first raid but then gets himself sent to the bench as he makes an unnecessary tackle on Vijay.

1-0 Vijay will be Dabang Delhi’s primary raider today and gets the better of Saurabh right away!

8:30pm: If you’re still new to the PKL caravan, fret not – we’ve got you covered. Here’s an explainer that simplifies all the rules and terminologies associated with PKL –

8:20pm: The 2022 edition of the Sportstar Aces Awards are back and we are celebrating the marvelous year for Indian Sports that 2021 was. From Neeraj Chopra and the other Olympic and Paralympic medallists to the Indian cricket team, we have a bunch of nominees who need your vote to win! Support your favourite athlete/team here.

8:10pm: We’ve got a thrilling game between Haryana Steelers and UP Yoddha going on right now. UP Yoddha has a narrow three-point lead with 10 minutes to go. Follow the game LIVE here –


8pm: Hello folks and welcome to our second game of the evening. We’ve got a cracker of a contest in store as last season’s runner-up Dabang Delhi takes on season six champion Bengaluru Bulls. Before we get to that, here are the results from the last three days –