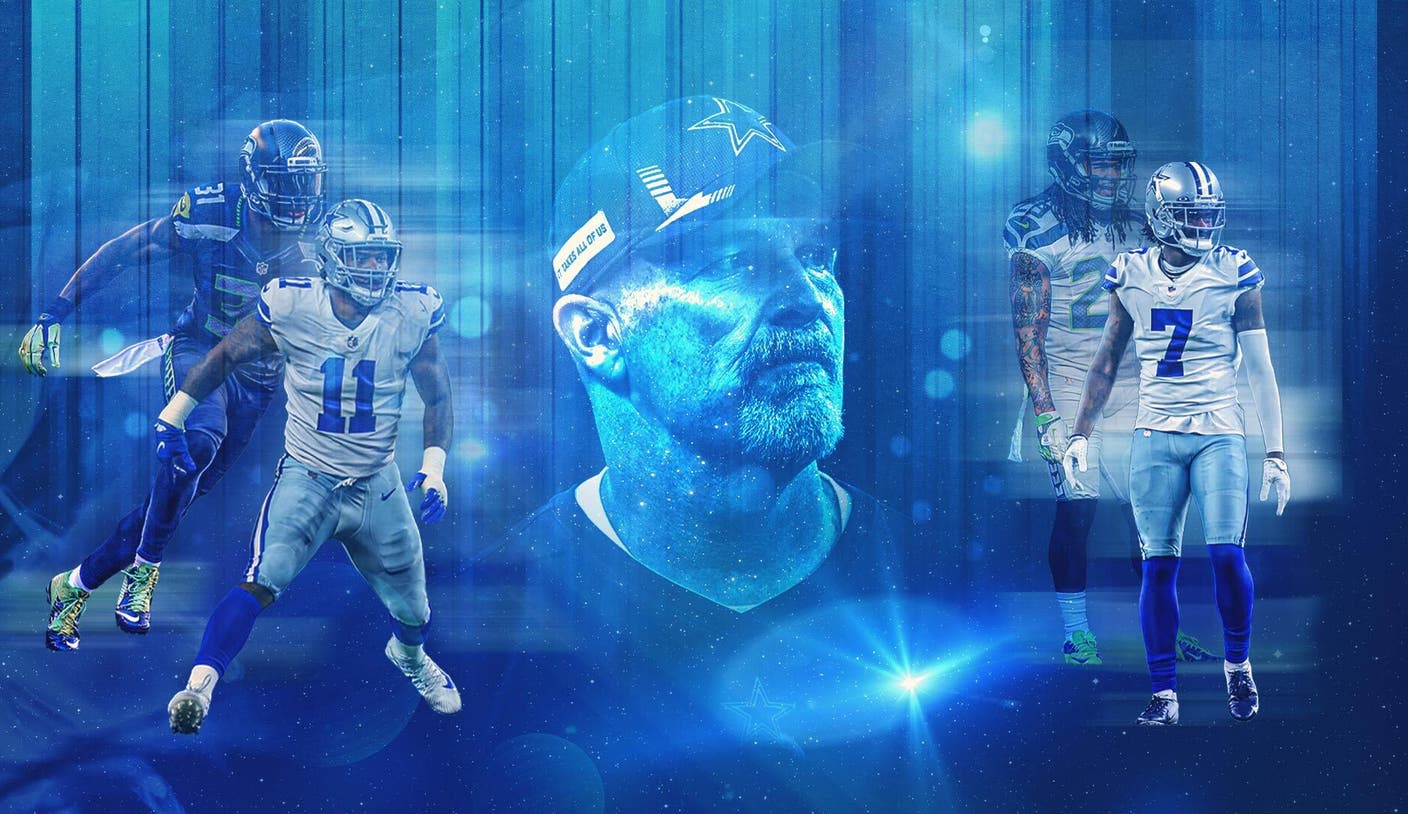 The last time the Dallas Cowboys faced the San Francisco 49ers in the postseason, 27 years ago, Dan Quinn had just completed a stint as defensive line coach at William & Mary.

As a fan, Quinn closely followed the hotly contested series as the two teams met in the NFC Championship for three straight postseasons, with the winner moving on to also win the Super Bowl.

“I’m damn fired up, man,” Quinn told reporters this week when asked about competing against San Francisco. “Are you kidding me? The early ’90s, Dallas, the Niners and some of those championship games — for me, coming up and watching some of those, I can hear [John] Madden and Pat [Summerall] talking it through.

“But my first Dallas and Niners playoff game, I’m pretty fired up to do it.”

“I still remember those games, and I’ve never rewatched them,” Shanahan told reporters this week. “It was a part of my childhood. That was such cool football because everyone knew: Those NFC Championships those three years were the Super Bowl.”

FOX NFL Analyst Jimmy Johnson joins Colin Cowherd to discuss the Cowboys vs. 49ers matchup and the importance of momentum entering the playoffs.

Now, the two coaches who helped lead the Atlanta Falcons to a Super Bowl appearance five years ago will be on opposing sidelines in the NFC wild-card round when the Cowboys host San Francisco on Sunday (4:30 p.m. ET, CBS) at AT&T Stadium.

Dallas holds a 5-2 edge in the all-time playoff series, but the Niners won the last time the two teams met in the postseason, a 38-28 victory in the NFC Championship on Jan. 15, 1995, at Candlestick Park.

Quinn and Shanahan, of course, are tied together as the faces of Atlanta’s Super Bowl LI meltdown, when a 28-3 third-quarter lead evaporated, and the Falcons lost to the New England Patriots 34-28. Shanahan served as the offensive coordinator. Quinn was the head coach.

“It’s a shared experience that we have, but one that hopefully, years from now, there will be other things to talk about in a better way,” Quinn said with a chuckle. “Hey, I get it. A couple years ago I would have been pissed about it and tried to blow it off. But it was part of me going back and trying to fix some things and seeing how I could do some things better. I had to go back and look at that moment, too, and know that it is hard to get there.”

Quinn, who was fired by the Falcons after an 0-5 start to the 2020 season and finished with a 43-42 record in Atlanta, said he wanted to work with Shanahan back then because of his ability to adapt and change his scheme based on his players. But like that of his father, Kyle Shanahan’s offensive scheme always starts with a physical run game.

“He’s tough,” Quinn said of Shanahan. “He’s gritty. He knows how to attack — not just the field vertically but horizontally as well. That’s what makes the matchup tough because he really does attack the entire field.”

Quinn also understands the unique rivalry between the 49ers and Cowboys. He worked as a defensive quality-control coach and defensive line coach for San Francisco from 2001 to 2004.

“I was fortunate enough to start at the Niners when Bill Walsh was still there,” he said. “It was my first experience and first insight into roles for a player: This could be a short-yardage fullback or this guy could be a [situational] pass-rusher. It just kind of opened my mind to new possibilities for roles for players and how to feature guys.”

Colin Cowherd: Bet the over and 49ers to cover I FOX BET LIVE

Colin Cowherd believes the Cowboys will beat San Francisco on Sunday, but he expects the 49ers to cover in a high-scoring game.

In his first season as defensive coordinator with the Cowboys, Quinn has flourished. A year ago, Dallas had one of the worst defenses in the NFL, allowing a franchise-record 473 points in 2020. The Cowboys also had the second-worst run defense in the league, allowing 159 rushing yards per contest during a 6-10 campaign in coach Mike McCarthy’s first year with the team.

Fast-forward to this season, though, and the 12-5 Cowboys won the NFC East for the first time since 2018.

Quinn’s defense had much to do with that turnaround. He has used Walsh’s philosophy to develop the Dallas D into one of the top groups in the NFL. The Cowboys lead the league in takeaways (34) and interceptions (26) and are No. 2 in getting off the field on third down (34%).

What’s more, the Cowboys have the NFL’s interception leader in Trevon Diggs. In his second season, Diggs has developed into one of the league’s best corners, and his 11 picks this season tie him with Everson Walls (1981) for the franchise record.

Versatile rookie linebacker Micah Parsons also has an impressive season stat line: 13 sacks, 84 combined tackles (including 20 tackles for loss), 42 QB pressures and three forced fumbles. Parsons, a front-runner for the league’s Defensive Rookie of the Year Award, finished 1.5 sacks away from the rookie record set by Javon Kearse in 1999.

All that said, the Cowboys are still susceptible against the run, giving up 4.5 yards per carry, which ranks 23rd in the NFL. That could be an issue against San Francisco, which boasts one of the better run offenses in the league.

Marcellus Wiley examines what’s at stake for Dak Prescott and the Cowboys ahead of their playoff matchup against the 49ers.

Quinn has focused on developing Dallas’ young defenders. Parsons is called “the Lion” because of his fierce nature in tracking down quarterbacks, and he gave Diggs the nickname “the Eagle,” saying that Diggs controls everything in the air, and he controls everything on the ground.

“With most people, it’s always about football,” Parsons said of Quinn. “But when I first met Q, he was like, ‘I know you’re going to be a really good football player, but what I care about is what kind of person you are, how you treat your teammates, how you act in practice, how you look in walkthroughs. I know you’re going to be good on Sundays, but I want to see how good you are during the week.’ It’s always the little things with Q.”

At the defense’s core, Quinn has developed a culture of trust, accountability and caring for one another, cultivating a selflessness on that side of the football.

“That whole defensive group is very tight,” McCarthy said. “It’s a group whose confidence and belief just continues to grow. I think it’s like anything: Now that we’re getting healthy, we’re playing in a really good rhythm. The connections have been really fun to watch. But like anything, I think they realize we have more to give.”

The energetic Quinn said he has cherished the one-on-one mentorship with players in his return to working as a defensive coordinator.

“When you get let go, some of the joy is gone,” he said. “You put your heart and soul into it, and it doesn’t work out. And so, by me coming here and being a part of this, I’ve recaptured part of that — what I love about coaching and all the energy that goes into it.”

Skip Bayless: Dallas will win, and Prescott will be the star

Skip Bayless shares his confidence level in Dak Prescott ahead of the Cowboys’ playoff matchup with the 49ers.

Before his head-coaching gig in Atlanta, Quinn led one of top-rated defenses in the history of the league in Seattle. The Legion of Boom helped the Seahawks reach back-to-back Super Bowls during his tenure as defensive coordinator.

Now that Quinn has experienced some success again with the Cowboys, NFL teams are knocking at his door for a potential second opportunity as a head coach. He turned down a chance to interview for the vacant Jacksonville Jaguars position but reportedly has interviews scheduled with the Broncos, Chicago Bears and Miami Dolphins.

“I wasn’t coming here to look [for] what my next job would be,” said the 51-year-old Quinn. “I wanted to come in here, have a blast and hopefully kick ass and make an impact. If those moments come, I’ll be ready for them if the right scenario came about.

“But honestly, I’m having a blast being right here with this crew and going for it. That’s where my mind is. That’s where my heart is. I don’t really spend a lot of time thinking about down the road and what’s next. I just really like being in the moment with my guys.”

Eric D. Williams has reported on the NFL for more than a decade, covering the Los Angeles Rams for Sports Illustrated, the Los Angeles Chargers for ESPN and the Seattle Seahawks for the Tacoma News Tribune. Follow him on Twitter @eric_d_williams.