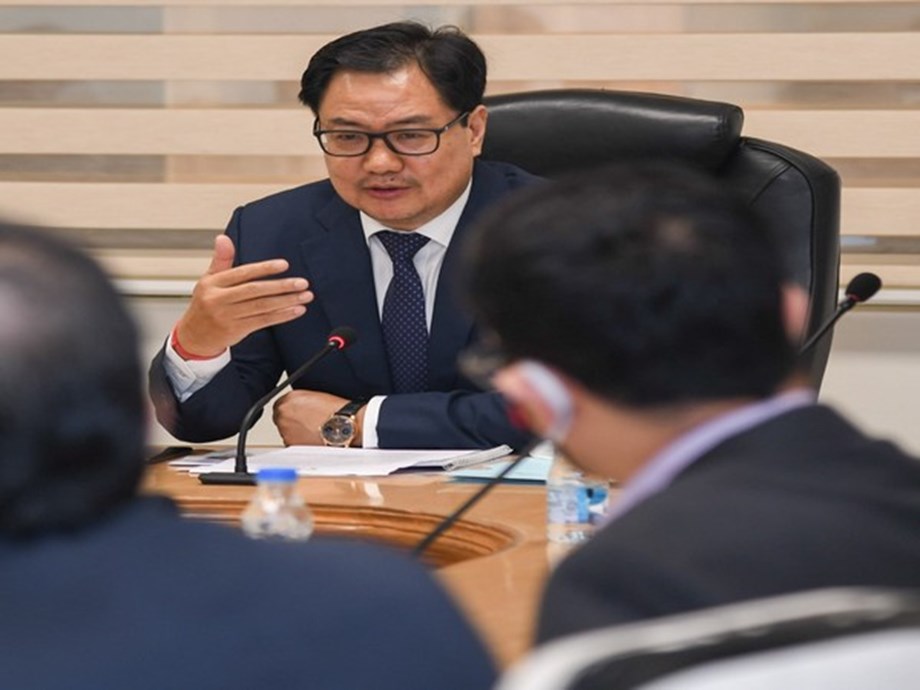 Union Minister of Youth Affairs and Sports Kiren Rijiju on Wednesday met with the representatives of sports goods and equipment manufacturers and discussed in detail ways to improve the coordination between the government and sports manufacturers in the country, with an effort to work towards the common goal of strengthening the sports ecosystem of India. The meeting was attended by over 30 representatives of sports manufacturing companies who are members of four major trade bodies in India — The Federation of Indian Chambers of Commerce & Industry (FICCI), Confederation of Indian Industry (CII), Associated Chambers of Commerce and Industries in India (ASSOCHAM) & Confederation of Sports and Recreational Industries (CSRI).

The meeting was also attended by senior officials of the Sports Ministry, including Sports Secretary Ravi Mital. While the representatives of the sports manufacturers praised the minister for all his work towards building a sports culture in India, especially initiatives like Khelo India and Fit India, they also discussed in detail ways to incorporate the sports manufacturing sector in Prime Minister Narendra Modi’s vision of Atmanirbhar Bharat and help make India one of the powerhouse exporters of sporting goods and equipment in the world.Speaking at the event and addressing the suggestions from the participants, Rijiju, in a statement, said: “We all have the same objective and are moving in the right direction. I would like to propose a two-pronged approach to move forward — one that we will have an official level discussion between the Ministry of Youth Affairs and Sports, Ministry of Commerce and Ministry of Finance for better inter-ministry coordination.

“I will personally speak to the Finance Minister and Commerce Minister on today’s discussion especially with regards to the policy matters and joint ventures. Secondly, we also need to convince state governments, (to join hands with us). For instance when a smart city is being conceptualised, it must include provisions for sports and fitness activities in its core concept as a smart city. We can also promote sports-related industries there. We need to have a dialogue with the state governments to ensure that they give top priority to sports and fitness,” he added. (ANI)