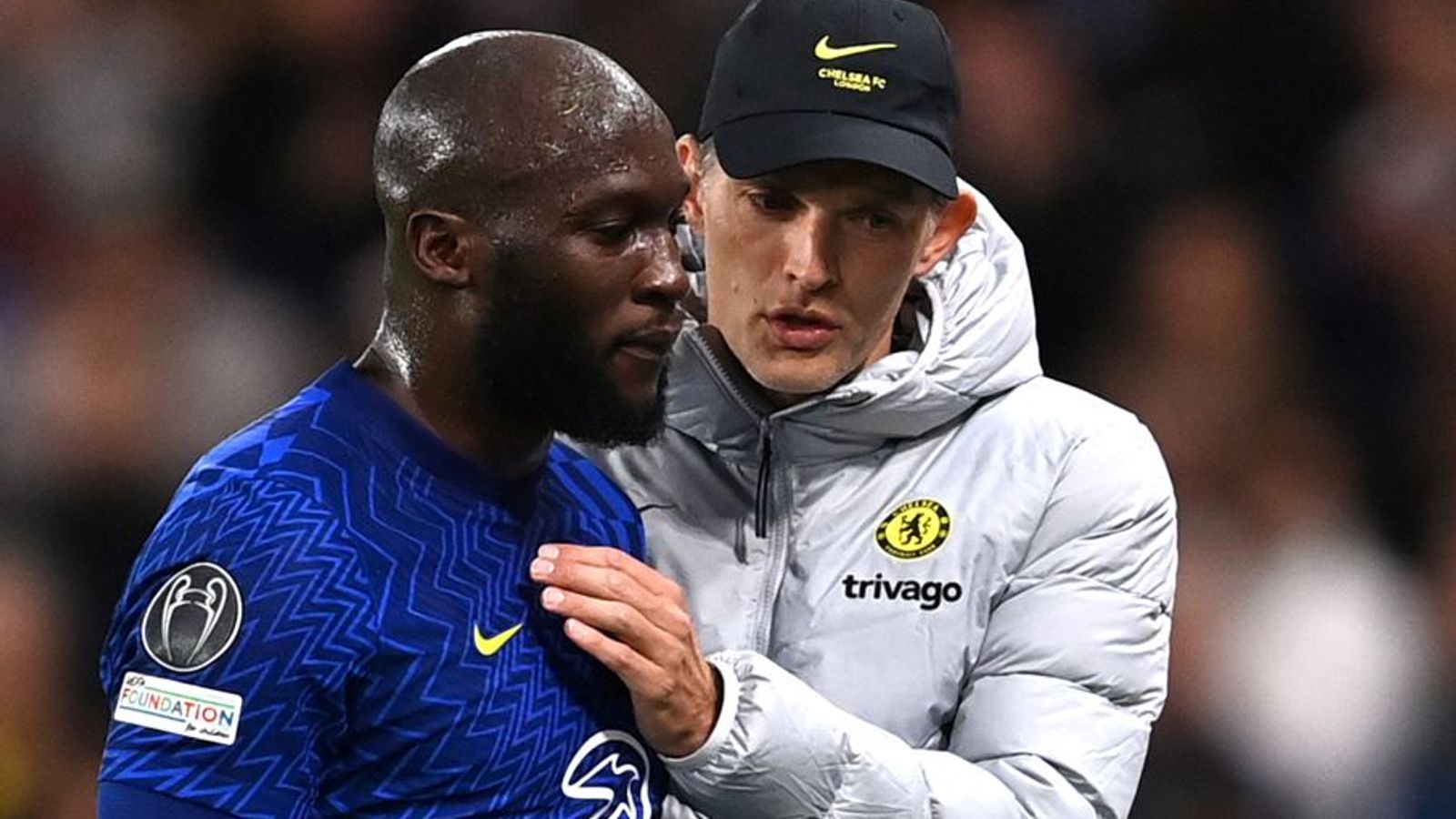 Thomas Tuchel says he is not happy with Romelu Lukaku after the striker expressed his displeasure with his situation at Chelsea, adding the quotes are “just not helpful”.

Lukaku – who joined Chelsea in a club-record transfer in the summer – gave an interview to Sky in Italy in which he said he was “not very happy with the situation” at Stamford Bridge, and complained of Tuchel’s decision to play “a different formation”.

The interview was recorded earlier this month but published on Thursday – just days before Chelsea face Liverpool, live on Sky Sports, in a huge showdown between the two sides bidding to keep pace with Manchester City in the Premier League title race.

Asked for his reaction to Lukaku’s interview, Tuchel said: “I don’t like it because it brings noise that we don’t need. It’s just not helpful.

“On the other side, we don’t want to make more out of it than it actually is. You know very well how it is – it’s very easy to take lines out of context. It’s very easy to shorten lines and make headlines, then later realise that it’s not so bad and maybe not what he meant.

“But let’s be honest that we don’t like it.”

Tuchel also revealed that Lukaku did not speak to him about his feelings before the interview went live, and that he was taken aback by the striker’s apparent unhappiness.

“I don’t feel him unhappy,” said Tuchel. “I feel him the exact opposite, that’s why it’s a surprise.

“But I’m the wrong person to ask.”

Lukaku’s comments were published after a period in which he scored three goals in four games for Chelsea, and it appeared he was re-establishing himself in the team following a spell on the sidelines with an ankle injury.

Tuchel said Lukaku’s feelings should have been dealt with “behind closed doors, for sure”, and when asked whether the Belgian would be spoken to – and whether he could even face disciplinary action – replied: “We will and we will do it behind closed doors.

“We will do it openly, like I think the relationship has always been. No further comments in public on that.”

As well as Lukaku’s displeasure at his role in the team, Tuchel has also had to contend with a number of absences in his squad caused by Covid and injuries.

The head coach said after the draw against Brighton on Wednesday that it was “stupid” to think his side could compete for the title given their fitness issues and the fact they now lie eight points behind leaders City.

But while Tuchel admitted the squad were “angry” to drop yet more points, he dismissed any suggestion that Lukaku’s words could cause problems within the dressing room.

“You don’t have to hug each other, love each other every single day. Sometimes it’s good to be on the edge and be a bit in disharmony, in between certain boundaries.

“The thing with Romelu is I don’t think that anybody in this building is aware that he’s unhappy, and that’s what makes us surprised about these statements.

“So first of all we need to check because I see no reason why it should be like this. We wait for what Romelu says and then we will deal with it.”

FREE TO WATCH: Highlights from Chelsea’s draw with Brighton in the Premier League on Wednesday

In his interview, Lukaku also talked up a return to Inter Milan, where he spent two years and won Serie A before returning to Chelsea for £97.5m.

The 28-year-old apologised to Inter’s fans for the way he left the club and revealed his desire to rejoin the Italian champions while he is still playing at a “good enough level”.

But Tuchel played down any suggestion that Lukaku may want a quick return to San Siro, saying: “This is what you read into it. I did not read it completely.

“It’s very easy to take lines out of context and make headlines to get the best out of these interviews for several days.

“If it’s an important player, I totally understand the process and that’s why it’s a lot of extra noise.

“We are not here to just read the headlines and maybe we can take the time to try to understand what’s going on.

“It does not reflect the daily work, attitude and behaviour which Romelu shows here.”

Analysis: Which change is Lukaku referring to?

Lukaku’s main gripe seems to be with a “different formation”, but it’s difficult to see which change the Belgian is referring to. When Lukaku joined Chelsea, Tuchel was immediately asked what this would mean for the 3-4-2-1 system that helped them back into the top four and to Champions League glory.

Tuchel said in August: “We now have the chance also to play with two strikers, like they did at Inter with [Lukaku], or to continue with three strikers. We will see now how this works out.”

Was Lukaku promised a consistent strike partner in Timo Werner, someone to drop deep and do the dirty work while he worked the key areas in the penalty area and on the shoulder of the defender? For Inter, Lukaku had Lautaro Martinez or Alexis Sanchez beside him for practically the entire season, but for Chelsea that partnership role is unclear.

Lukaku and Werner have started only five times together this season, and only twice as a traditional front two. In the first of those two games, Lukaku and Werner were isolated in a 1-0 home defeat by Manchester City, and in the second they barely escaped Brentford with a 1-0 victory. Elsewhere, in Lukaku’s absence, Werner has been given opportunities to find form, but hasn’t grasped it, and Tuchel has more than often opted for a front three.

After returning from injury in late November, Lukaku was given only chunks of minutes – eight against Man Utd, 21 against Watford, 45 against West Ham and three against Leeds – opting to play a false nine in Kai Havertz on several occasions.

Tuchel will of course claim he has been protecting his £90m signing on his return from injury, but like any player, Lukaku wants to be on the pitch as much as possible. He said after the win at Villa on Boxing Day: “I think I needed a performance like this today, it has been difficult as every player wants to play. The manager has his reasons but I kept working hard.”

Thomas Tuchel’s injury-hit side face a series of pivotal fixtures in January, including Premier League clashes with title rivals Manchester City and Liverpool, plus three meetings with bitter rivals Tottenham.

Follow every Chelsea game in the Premier League this season with our live blogs on the Sky Sports website and app, and watch match highlights for free shortly after full-time.

Get all this and more – including notifications sent straight to your phone – by downloading the Sky Sports Scores app and setting Chelsea as your favourite team.