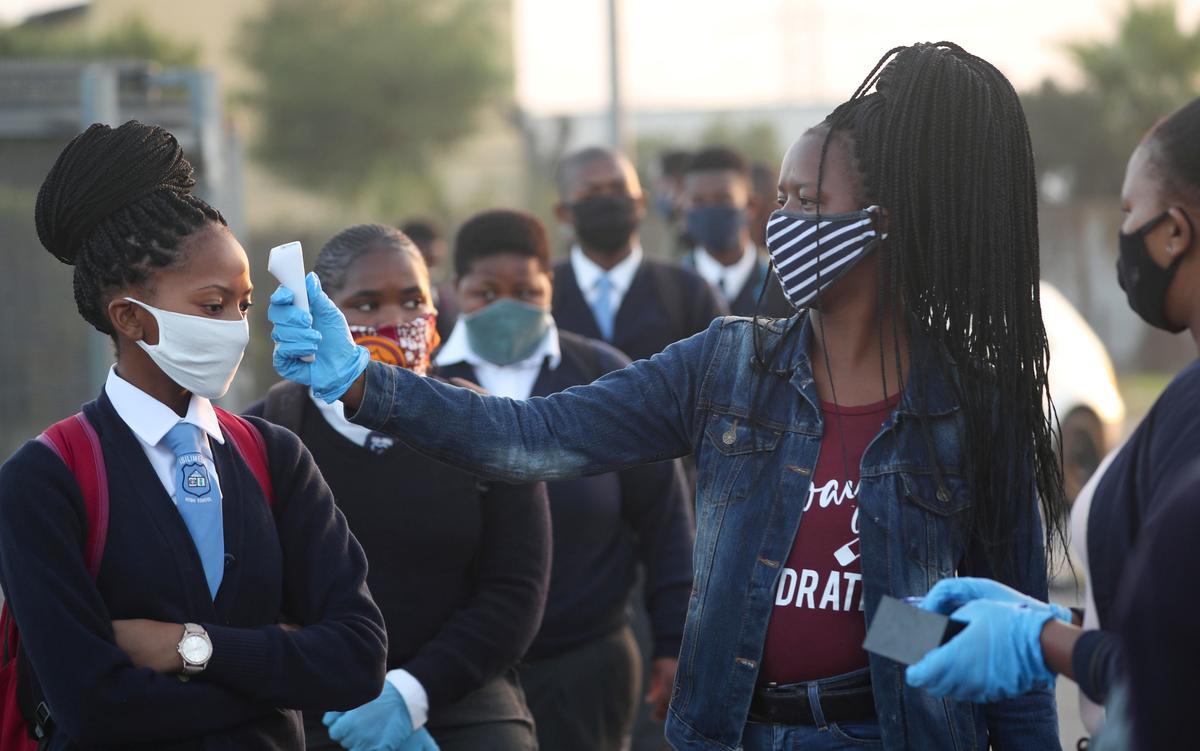 JOHANNESBURG (Reuters) – Children began returning to classrooms in South Africa on Monday as part of a gradual loosening of COVID-19 restrictions, even as some parents worried not enough had been done to guard against infections.

The resumption of the school year had been delayed after teachers’ unions urged school staff to defy an order to return to work last week, saying schools did not have enough masks, gloves and other equipment.

But the biggest union dropped its objections and Basic Education Minister Angie Motshekga said on Sunday that ramped-up efforts to equip schools meant 95% of primary and secondary schools could now host classes.

As children trickled through the gates of Zithathele Primary School in Soweto, a working-class township outside Johannesburg, staff took their temperatures at a makeshift check-point.

Classes were limited to 20 pupils and the school said it was giving them masks and gloves. But some parents were not convinced.

Ntomizodwa Zitha said her children, worried they were falling behind, had persuaded her to let them return.

“I let my child come today but tomorrow I won’t. It’s too dangerous,” she said.

The shutdown has exposed deep divisions between black and white, rich and poor that persist in South Africa’s education system a quarter century after the end of white minority rule.

Many government schools have no running water, making hand-washing nearly impossible. Others have been vandalised during a nationwide lockdown imposed by the government in March.

Government officials, however, worry that further delaying a return to classrooms would mean a generation of schoolchildren risks losing a key part of their education.

Initially, only pupils in grades 7 and 12 will return to class; other years will be phased in gradually.

As classes let out for the day, Aaron Motha said he was glad his son – in his final year at the elite Rand Park High School near Johannesburg’s financial district – was finally back in the classroom.

“The year was already gone … and they need to apply for university next year,” he said. “This school is better equipped than some others, so I was happy he’d be safe.”

South Africa, the continent’s most industrialised nation, has recorded nearly 50,000 cases of the novel coronavirus – the most of any African country – along with almost 1,000 deaths.

Basic Education Minister Motshekga said the government will find alternative arrangements for pupils at schools unable to open on Monday.

“The golden rule is there will be no school that will resume if not ready to do so,” she said.