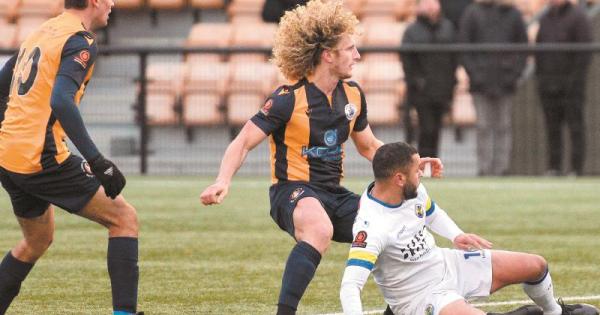 Slough Town and Hampton & Richmond Borough saved up all the post-Christmas entertainment for the second half as the Rebels eased to a comprehensive 4-1 victory at Arbour Park on Tuesday.

The Rebels won the match with four second half goals within the space of 20 minutes from Tyler Goodrham, Matt Lench, Aaron Kuhl and Guy Hollis. The Beavers replied late on through Jorome Slew, but it was little more than a consolation as the rampant Rebels once again closed in on the play-off spots.

On Boxing Day, they could count themselves slightly unfortunate to have come away with nothing from a 3-2 defeat at league leaders Oxford City, but any lingering frustration or resentment from that game was trampled on as Slough enjoyed their sweetest purple patch of the season to see off Hampton.

The Rebels were impressive throughout, but the scoreboard didn’t reflect that until the 55th minute when Goodrham scored on his home debut. Kuhl played a fantastic ball over the top and Goodrham took it in his stride before slotting beyond Alan Julian. Having been knocking at the door for much of the match the Rebels now burst through it. Lench doubled their lead when he slammed home an inch-perfect cross from Goodrham at the back post in the 61st minute. A third then followed in the 66th minute when Lench sprayed a ball across the field for Kuhl who took a couple of touches to compose himself before firing into the bottom right-hand corner. The game was now won, but the Rebels were in their pomp and Lench was orchestrating the march. He came close to a third with a shot that deflected just wide of the post, and, from the resulting corner, he put the ball onto the head of the inrushing Hollis who powered the ball beyond Julian.

Slew scrambled home the scantest of consolations, directing the ball home through a crowded penalty box in the 82nd minute, but there was little threat of a comeback. Alfonso Tenconi will be disappointed he didn’t add to his seven goals this season for Slough, but he linked up well with Goodrham in the early stages, with the latter seeing his goal bound shot blocked. Julian was then called into action to keep out Lee Togwell’s header from a Hollis long throw, while Tenconi was also denied by a smart save. Lench also blazed over a chance late in the half and the sides somehow went in level pegging, but for the Rebels the first half was merely the warm-up act.

The result lifts them to 11th in the table, three points off the play-offs ahead of Sunday’s (January 2) return fixture with Oxford City.