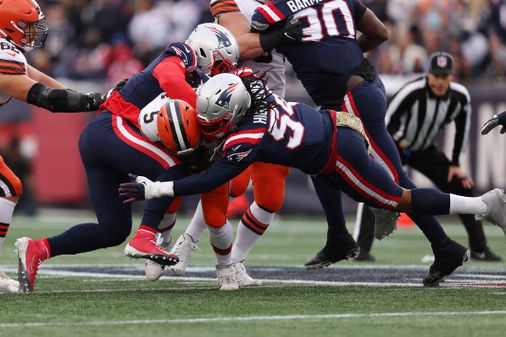 We’ll start with Belichick’s Patriots. Their New Year’s resolutions should be to get back to playing their best football and to win a playoff game.

The team’s two-game skid after a seven-game winning streak has exposed them as frontrunner-ish. They’re a team built to play with a lead behind a balanced offense and a stingy defense. When they are confronted with double-digit deficits, as they were in uninspired losses to the Colts and Bills, they lose their composure, lose their focus, and lose games. That’s un-Patriot-like.

Still, the Patriots have the components — a rugged running game and a defense tied for the fewest points allowed per game — to make a playoff push as a wild card. The dominance during the seven-game winning streak wasn’t sustainable, but the Patriots are better than they’ve performed the last two weeks.

A first-round playoff matchup against the Bills or Bengals is winnable and would represent progress in the post-Tom Brady era. The last time the Patriots won a playoff game was Super Bowl LIII, capping the 2018 season. This could be the first time since 2008-10 that the Patriots went three seasons without a playoff victory.

The Celtics season is sinking faster than the Lusitania, with new nadirs nightly. Ravaged by COVID absences, afflicted by nonexistent chemistry, and bereft of outside shooting, the Celtics are a hoops hot mess. The Green’s resolutions are to get out of denial and determine whether Jayson Tatum and Jaylen Brown work together.

We’re past the point of hovering around .500 being an aberration. It’s who they’ve been for the last two seasons. A wise man once said, “You are what your record says you are.” Their 4-for-42 masonry work against the Clippers Wednesday night — the second-worst 3-point shooting percentage (9.5) in NBA history on 40 or more attempts — highlighted a major design flaw. They don’t have enough perimeter shooting for the modern NBA or to complement Tatum and Brown.

Speaking of those two, the Celtics are fast approaching a fork in the road. Neither one is good enough to carry a team to contention on his own. That was obvious earlier this month when Tatum was the fulcrum on a 1-4 Western road trip with Brown sidelined. Brown has struggled to keep the team afloat sans Tatum in ignominious losses to the Timberwolves and Clippers.

The Bruins will finally take the ice again New Year’s Day. They’ve had idle time due to a COVID outbreak that iced much of the NHL to spin the Spoked-B and evaluate where they land. The Bruins’ resolution should be fixing their prospect pipeline, which is a clogged drain; nothing is flowing through it.

It looks doubtful that current general manager Don Sweeney is the man for that job. He took over in 2015 with the promise of a more fertile farm system. Instead, he has merely milked the Patrice Bergeron- and Brad Marchand-led core to the very last drop of the puck. There have been major hits in winger David Pastrnak and defenseman Charlie McAvoy. But not nearly enough of them.

Where is the Bruins’ version of Jordan Kyrou of the Blues, Jason Robertson of the Stars, or even Zach Whitecloud, showing top-four-defenseman potential for the Golden Knights?

In a league that is skewing younger, the Bruins are stuck mostly riding their old guard. The threnody for Sweeney will be the 2015 draft, when he had three consecutive first-round picks and passed on players such as Mathew Barzal, Kyle Connor, Brock Boeser, Sebastian Aho, and Travis Konecny.

Manager Alex Cora made a triumphant return to the dugout, and the team returned to relevance with a trip to the American League Championship Series in 2021. Still, the Sox’ resolution is to not avoid commitment.

Since Chaim Bloom took the reins as chief baseball officer, the Red Sox have avoided long-term contracts like the plague. Before baseball was shut down by another labor dispute, Bloom rummaged through the bargain bin for starting pitchers (Rich Hill and James Paxton) and brought back Jackie Bradley Jr., absorbing his contract to procure prospects.

To win a World Series — which his former employer, Tampa Bay, has never done — Bloom at some point is going to have to take a leap of faith and finances. That could be backing up the Brink’s truck for Rafael Devers or Xander Bogaerts, who can opt out of his contract following the 2022 season. Or it could be bringing in a free agent finishing piece.

The Sox should not forfeit their biggest competitive advantage — the ability to dole out big contracts and being able to write them off if they fail.

2021 was a banner year for the Revolution. They took the Supporters’ Shield as the best regular-season team and set an MLS record for points (73). MLS’s screwy playoff format punished their excellence with a 24-day hiatus, contributing to a disappointing Eastern Conference semifinal loss to New York City FC. The Revolution are back with a new crest and new additions, midfielder Sebastian Lletget and center back Omar Gonzalez.

The Revolution’s resolution is to not be the Buffalo Bills of MLS. It’s time for them to finally lift the MLS Cup. Enough close calls and letdowns.

And how about some news on a soccer-specific stadium? Revolution great and ESPN broadcaster Taylor Twellman hinted earlier this month that they had made progress there. But like a lot of New Year’s resolutions, the new stadium plan goes unfulfilled year after year.

Christopher L. Gasper is a Globe columnist. He can be reached at christopher.gasper@globe.com. Follow him on Twitter @cgasper.