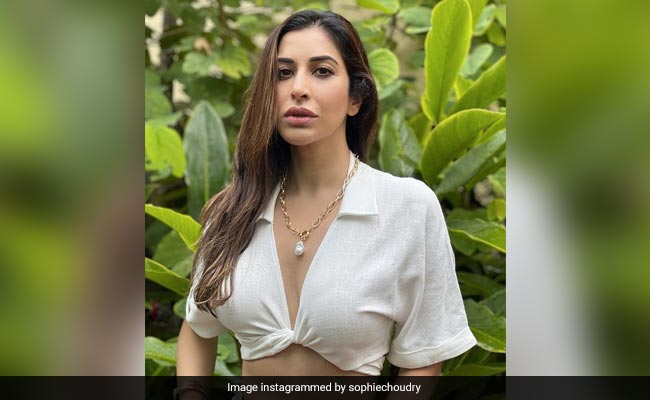 The rainy season is about to set in and the weather can affect our moods too. For Sophie Choudry, monsoon is not just affecting her mood but also reflecting on her social media timeline. She posed for the camera in a white crop top and blue tattered denim shorts, looking ready for the rains. The vibrant green trees around her added much-needed charm to her photos. In the caption, she wrote, “Meet me in the monsoon.” According to the post’s location detail, the music sensation’s photos were taken in Goa.

Sophie Choudry‘s fans never have anything to complain about. That’s because she keeps treating her Instafam to amazing content on a regular basis. And, showing us her monsoon mood isn’t the only entertaining thing that she has posted about. Recently, on World Music Day, Sophie dropped a transition video where she is switching from casual clothes to a shimmery outfit. The caption read, “What could be better than a gig on World Music Day. All set to rock the stage, doing what I love most. Blessed to live my dream.”

Sophie Choudry’s Instagram posts often leave us wanting more. That’s because of the uniqueness of her content. At the beginning of the year, Sophie came up with an out-of-the-box idea. The month of January motivated her to spend most of her time on the couch. We aren’t saying it. Sophie confessed it through the caption of her post. Sophie posted a photo where she is reclining on a sofa. What’s the caption? Well, the sensation renamed the month and wrote, “Renaming January as Couch-uary”. She has added the hashtags, “All couched out”, “sun daze”, “Sunday vibes”, “weekend feels” and “waiting for February”.

Sophie Choudry was last seen in the movie Once Upon A Time in Mumbai Dobaara.