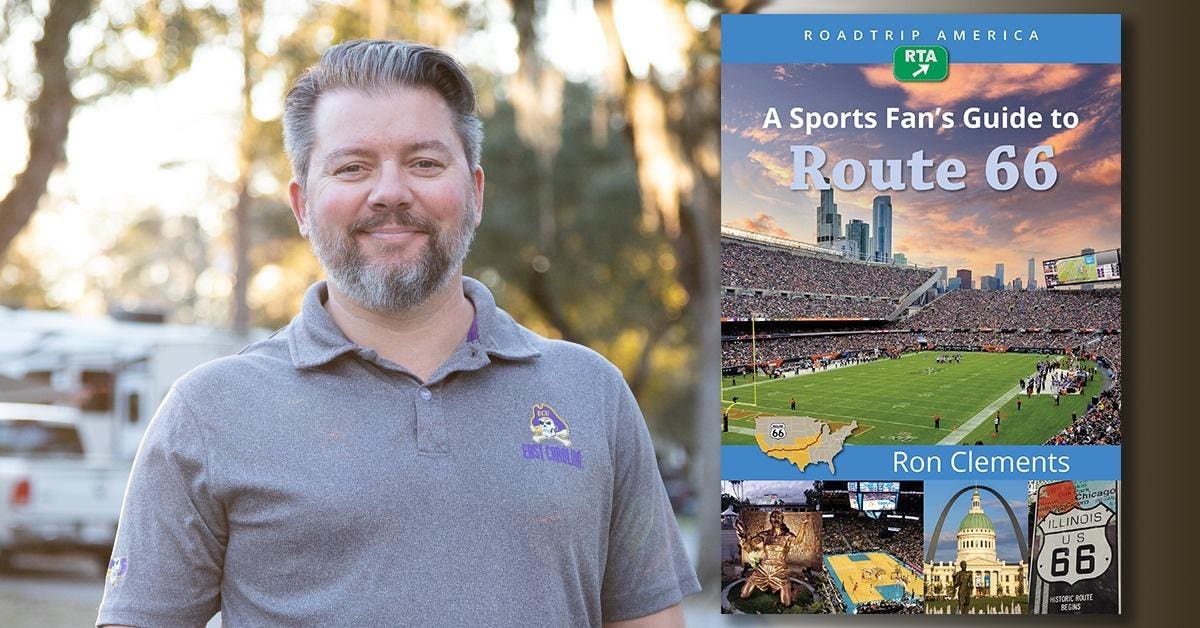 Ron Clements had just wrapped up his first book, documenting a summer spent traveling to all 30 Major League Baseball stadiums, when his wife, Patti, asked what his next project would be.

Whether the question was rhetorical or not, Clements already knew the answer. He was going to write about two of his favorite passions: traveling and sports, and he found the perfect confluence of those passions along the most famous highway in American History, Route 66.

The idea had been percolating ever since Clements went to a football game in Tulsa with a college friend and stayed at the Desert Hills Motel, a small, classic property along the historic route now popular with nostalgia seekers.

“That’s what planted the bug,” said Clements, whose book, “A Sports Fan’s Guide to Route 66” hit shelves earlier this year. “For people like me, who love to travel and love sports, it was a perfect fit.”

So, in the fall of 2018, the Clements loaded up their RV along with a tow vehicle and started a two-month trip from Chicago to Los Angeles. Though Route 66 no longer exists as an official U.S. Highway and has been replaced by a ribbon of concrete that carries five different interstates between Lake Michigan and the Pacific Ocean, much of the original route still exists in the form of local roads, state highways and access roads along many of the same freeways built to replace it.

And that’s the route Clements took during his cross-country adventure.

“It was really important for me to actually traveled the entire route and not just sit in a library somewhere and do a bunch of research,” Clements said.

What he found along the way was a sports fan’s nirvana, with 19 professional teams in each of the five “major” American leagues; seven NCAA Division I universities including three NCAA FBS schools; six separate NASCAR tracks and countless local dirt tracks located along or near the route.

Clements also came across multiple rodeo arenas stretching all the way from Missouri to Arizona and a “surprisingly big” rugby scene in Tulsa.

And for baseball fans, Route 66 is nothing short of heaven.

Five different MLB teams — the Cubs and White Sox in Chicago; Cardinals in St. Louis; Angels and Dodgers in Los Angeles — play in venues along the way, with three more (the Brewers, Diamondbacks and Rangers) located within a day’s drive.

“If you’re a baseball fan, Route 66 is one of the most epic road trips you can do,” Clements said.

After completing his trip, Clements returned home to start work on further research and writing, a process that took around eight months and after the book was finally released, he hit the road again for a book tour which still has one more date, March 5 in Las Vegas.

“The feedback I’ve gotten on the book has been phenomenal,” Clements said. “It had never been done before so I felt like there was a void that needed to be filled and glad I did it.”