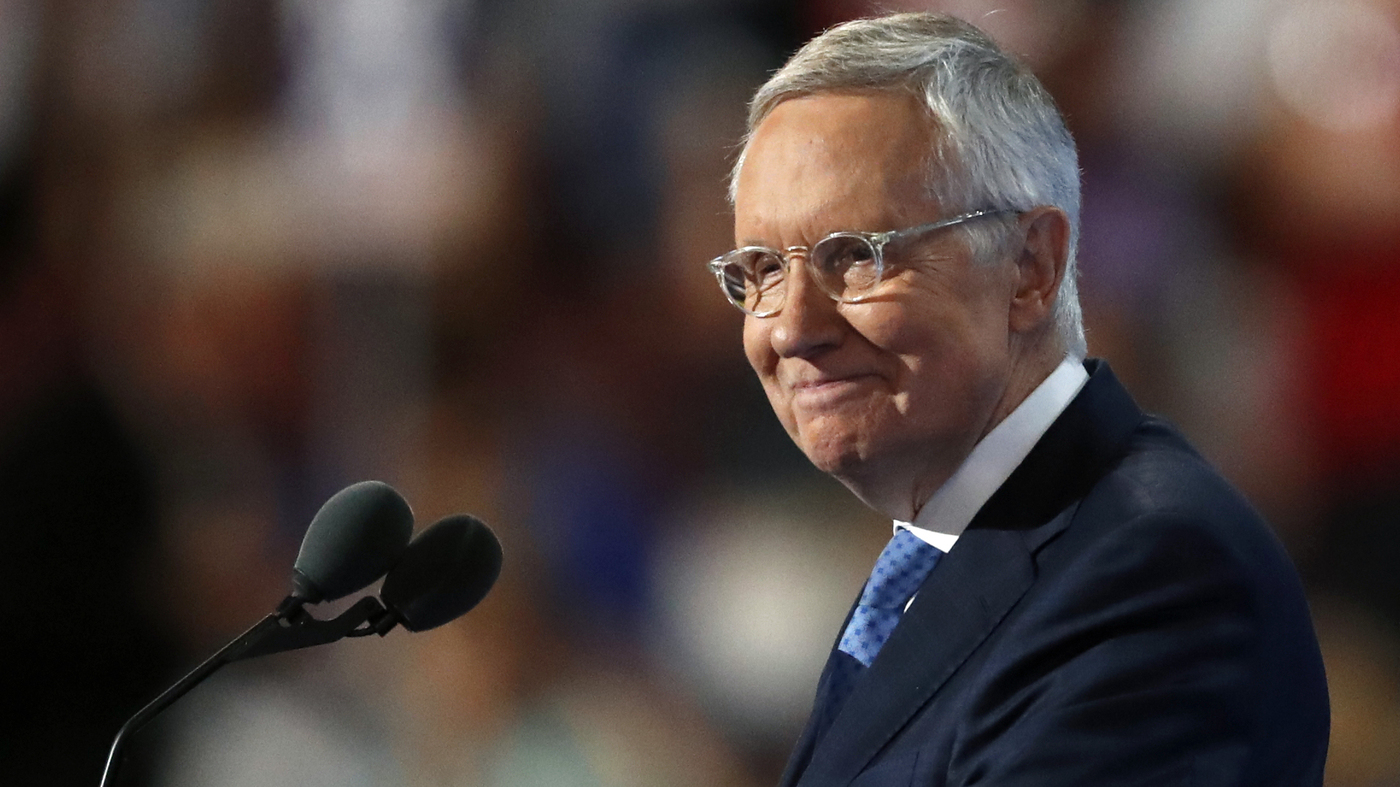 Senate Minority Leader Harry Reid of Nev., smiles from the podium as he speaks during the third day of the Democratic National Convention in Philadelphia on July 27, 2016.

Senate Minority Leader Harry Reid of Nev., smiles from the podium as he speaks during the third day of the Democratic National Convention in Philadelphia on July 27, 2016.

The Nevada Democrat, a one-time amateur boxer who brought a pugilist approach to politics, has died. He was 82.

His death was confirmed Tuesday night in a statement from the current Senate leader, Chuck Schumer of New York.

“He’s gone but he will walk by the sides of many of us in the Senate every single day,” Schumer wrote in his statement.

Reid, who had a series of health issues in recent years, opted not to run for reelection in 2016, and acknowledged he was diagnosed with pancreatic cancer in an interview with the New York Times in late 2018.

Reid served in Congress for 34 years, first in the House and later for three decades in the Senate, where he rose to become one of the longest-serving party leaders in the chamber’s history.

Born into poverty in the tiny Nevada town of Searchlight, where the two industries were mining and prostitution, Reid transformed his shame over his hardscrabble roots into the central narrative of his political career.

“I was ashamed, embarrassed about Searchlight. When I went to college, was in was in high school, law school, I just didn’t want to talk about Searchlight,” Reid recalled in his 2016 farewell address to the Senate.

One night he attended a speech at the University of Nevada in Reno by Roots author Alex Haley that changed his worldview.

He recalled, “[Haley] said, ‘Be proud of who are you are. You can’t escape who you are.’ And I walked out of that event that night a different person, a new man. From that day forward, I was from Searchlight. When I got out of law school, I bought little pieces of property. So I had contacts there. My parents lived there, so I became Harry Reid, the guy from Searchlight.”

Soft-spoken and with an unusually strong knack for saying the wrong thing, Reid’s rise in politics was never attributed to his social skills. He so loathed the Washington social scene that he bragged about how few dinners he managed to attend.

Reid was known for ending phone calls by simply hanging up without proper goodbyes. No one was immune to it.

“I gotta admit, in the years to come, every time I hear a dial tone, I’ll think of Harry,” now-President Biden once joked.

Reid entered Congress a very different senator than he left it. He was originally a centrist Democrat, who campaigned in favor of gun rights and opposed abortion, citing his Mormon faith. In the early decades of his career, he was a Western-style Democrat who cultivated cross-aisle relationships at a time when the Senate prided itself on its clubby atmosphere.

Sen. Harry Reid is escorted to the podium by wife Landra before speaking during the Democratic National Convention in Philadelphia on July 27, 2016.

Sen. Harry Reid is escorted to the podium by wife Landra before speaking during the Democratic National Convention in Philadelphia on July 27, 2016.

His rise in the political ranks coincided with a rise in the nation’s partisan politics — and Reid became a central figure in the story of Washington polarization. He took over the minority leader post when then-Minority Leader Tom Daschle, D-S.D., was defeated for re-election in the 2004 midterms. It was a historic upset against a party leader that stunned Democrats and soured relations in the Senate.

A master Senate tactician with a take-no-prisoners approach to politics, Reid centralized power in the leader’s office and focused his efforts on blocking President George W. Bush’s agenda wherever possible. Democrats blocked Bush’s judicial nominations in an escalation of the long-running judicial wars. He also worked to successfully derail Bush’s effort to partially privatize the Social Security system.

President Barack Obama’s historic 2008 victory ushered in a new era, in which Democrats initially enjoyed super-majorities in Congress and used them to enact sweeping legislation, including the landmark 2010 Affordable Care Act. Reid later called it “the most important thing we’ve done for the country and the world.”

It came with a political price. Democrats lost control of the House and lost seats in the Senate in the 2010 midterms, marking the beginning of the Tea Party era in Washington — in which conservative Republicans worked to block Obama at every turn. As the Republican Party turned further right, Reid turned further left. He abandoned his previously socially moderate stances and announced support for gay marriage and gun control legislation. He became an ardent defender of abortion rights and access when Republicans intensified their efforts to dismantle Planned Parenthood.

Senate Republicans also obstructed in turn, blocking many of Obama’s presidential nominations and further edging the chamber into partisan warfare. Reid chose to break the deadlock over nominations by invoking the “nuclear option” in 2013. He forced through a rules change that would lower the threshold for approval from 60 to 51 for every presidential nominee except the Supreme Court.

“The Senate is a living thing, and to survive it must change as it has over the history of this great country,” Reid argued in defense of his decision. Republicans objected furiously and warned of unintended consequences.

“I say to my friends on the other side of the aisle: You’ll regret this, and you’ll regret this sooner than you may think,” Senate Minority Leader Mitch McConnell, R-Ky., warned.

McConnell was right. Republicans won control of the Senate in 2015, and further weakened the filibuster rule in 2017 to apply to Supreme Court nominees in order to overcome Democratic objections to Neil Gorsuch. The Reid precedent was all they needed.

Although some Senate Democrats would come to later regret their votes in favor of the 2013 nuclear option, Reid never did.

“I doubt any of us envisioned Donald J. Trump’s becoming the first president to take office under the new rules. But what was fair for President Obama is fair for President Trump,” Reid wrote in in a New York Times editorial at the end of his Senate career.

In an interview in December with the New York Times he again defended the move.

Reid never concerned himself with popular opinion. The only person he ever really seemed to worry about was his wife, Landra. High school sweethearts who married at 19, Reid was openly devoted to her.

“She has been the being of my existence, in my personal life and my public life,” he once said. “She’s my first love. It will never end.”

Reid was considering retirement as his 2016 re-election approached, but a January 2015 accident at home sealed the decision. Reid fell while exercising, resulting in multiple bodily injuries that left him physically weakened and blind in one eye. Reid said the accident was not the only reason, but conceded that he wanted “to be able to go out at the top of my game.”

He quickly orchestrated a succession plan that made clear that his deputy, Schumer of New York, would succeed him as leader. Democrats elected Schumer unanimously, just as Reid had planned.