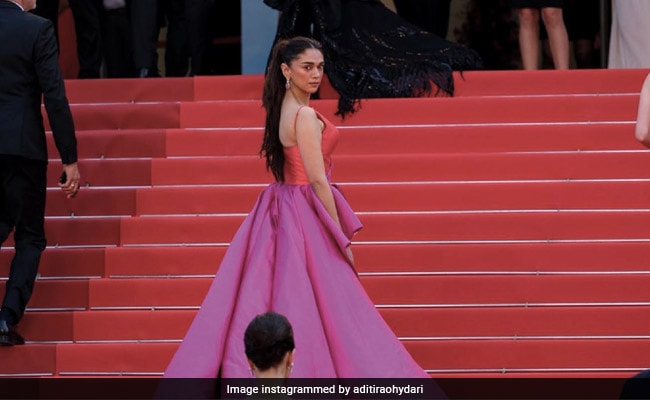 New Delhi: Aditi Rao Hydari has finally made her Cannes 2022 red carpet debut after teasing her fans with some breathtaking pictures from the French Riviera. The actress has shared the post on her Instagram handle, and we just loved it. For her red carpet debut, Aditi wore a red and pink thigh-slit gown with layers of pleats and a long train. She accessorised the look with drop earrings. The outfit is from the shelves of designer Mark Bumgarner. She kept her makeup on point and tied her hair in a sleek ponytail. Sharing the post, the actress wrote, “The moment I’ve been waiting for #mylifeisamovie,” followed with a heart emoticon.

Here have a look:

Ever since Aditi Rao Hydari checked into the French Riviera, the actress has been teasing her fans with some gorgeous pictures as she took over the streets for the photoshoot. On the first day, the actress has seen slaying in embroidered ivory organza sari and accessorised it with an emerald and diamond choker – designed by Sabyasachi.

Next, she stepped out in a blue striped shirt paired with blue pants and a chunky brown belt. She kept her makeup on point with red lipstick and a dewy base. Sharing the pictures, she wrote, “The Cannes light just hits different”

In the recent post, she was looking diva in a black short dress and accessorised the look with statement jewellery. She sported bold red lipstick, blush cheeks and mascara laden eyes.