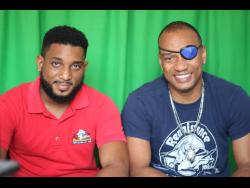 ( It’s Father’s Day in the year of Jamaica 60 and as part of the jubilee celebrations, The Sunday Gleaner’s Entertainment section is featuring the sound system culture, which was born in Jamaica in the late 40s and 50s through the creativity of the great pioneers. The work of these sound system fathers has been sustained by a succession of “sons” who continue to “do it for di culture” on a global level).

DJ 3D recalls that, in passing, sound system professionals and even strangers would often tell him how cool or how much of an influence and father-figure DJ Delano was. “Wait, my father?” he’d think. They would then see his father and tell him that he needed to listen to his son – the potential and talent he has. “Wait, my son?” the CEO of Renaissance Disco would respond.

Renaissance Disco was born out of a love for sound system culture and music. But it was like a forbidden affair when DJ Delano was growing up.

“My father, who was not only the owner of , but also built sound systems, didn’t want me to be a disc jockey. As a matter of fact, he sold his sound and got rid of all the equipment out of the house. He wanted me to take over his electronics business,” DJ Delano told The Sunday Gleaner.

It’s an all-too-familiar narrative of a father wanting more for his children than what he had and removing all possible influences in the hope that they will choose a direction from the obvious one. However, that did not prevent DJ Delano from pursuing the dream of one day owning a sound system with a difference.

“It all started from a young age, in prep school, when I would push around a wheelbarrow pretending I was setting up a sound system. Imagine, I couldn’t even go road as a youth. I was influenced by seeing my father work, him having Plus X, and anytime he built a sound system. Then, it was the Afrique, Soul Sensation and Peacemaker sound systems. I would walk from Vineyard Town to Allman Town to go to the dancehall sessions to listen to Metro Media and Stone Love – these to me, were the fathers of sound system culture I looked up to. It was, and is, an expensive hobby and I spent my life savings on sound. When he [my father] accepted it, is when I started coming in the papers,” DJ Delano shared.

The stories of father and son, both named Delano Thomas, are similar. Known more popularly as DJ 3D, his son, tells of a childhood of adventure, pushing around amplifier racks with a car speaker playing Eminem’s The Marshall Mathers album in the yard of the Renaissance Disco headquarters, all of which was like a revelation to his father.

Their thoughts every time persons gave reviews of one to the other was that they met a different Delano. It came to a point where DJ Delano would find himself at events DJ 3D was booked to play, find a corner to hide and observe.

“People would ask, ‘You don’t know your son?’ To this, I’d say no, in a way to get the truth out of them rather than force them to like him. I don’t ever want it to look as though because it is my son, I’m giving him preference or pushing his name,” DJ Delano said. “I really didn’t want him to be a disc jockey and I don’t consider myself to be just a DJ. He has the opportunity and time to explore more, whereas I didn’t have access to some of that. Still, I never discouraged him because I always hoped my children would be capable of taking over.”

DJ Delano said that like his own father, he always tried to encourage other aspects of the entertainment industry, including music production and studying electronics and computer technology to allow for a stable income.

“It’s important he finds a way to carry on the legacy … soon my time to sit back. As my son, I’d love for him to be able to take charge and spread the wings of the sound system. Renaissance Disco has built a legacy and there is a lot of experience and knowledge to give,” DJ Delano offered.

“It is true my father never discouraged me from it. He always said, ‘If you like it, or have a passion for it, do it.’ But he also wanted me to have another plan. One of the greatest lessons I have received from him is that of putting my all into something I love, and not to go into something because I see others doing it. Once that energy and money is invested, do it to the best of your potential; find your niche and do what you can to make something yours,” DJ 3D shared.

“It is in my DNA. I have that same passion my father has for music and for his children, but I also showed a renewed interest – somewhat of a renaissance, if I may say, in the entertainment sector and moreso the business of music. The challenges I have faced are more about living up to the name DJ Delano and meeting the standards of the sound. Every time I get a booking, if persons know my father, there is some amount of pressure to try and outdo him and make a name separate and apart from ‘Jr’ or ‘Delano son’. It has been more about me, challenging myself,” he continued.

DJ 3D’s musings are fuelled by the vast range of sound systems locally and also internationally, as he was raised partly in Florida. He explained that in addition to his father and the founding fathers of Renaissance Disco, there was also Miami-based sound system, Black Chiney.

“I ended up learning that a schoolmate of mine, Jordan Chin, who become my best friend … like my family now … also had a sound system family. We remixed the sound names to form our own and started doing events. I wanted to make my father see I was serious. I also learnt from then the importance of creating a legacy [which] your children can carry on,” said DJ 3D, who is the father of two.

He shared that he does not feel like the younger DJs or next generation after his, has a lot of persons or ‘fathers of sounds’ they can reach out to.

“Some of them not going to give them the time of day and if anything, I’d want persons to know they can reach out to me. I’ve learnt a lot from the experience of my father, the sound man dem and just being around many of the older generation of disc jockeys, producers and technicians, there’s nothing more valuable than that, I have that to share, so to them I’m forever grateful,” he said.