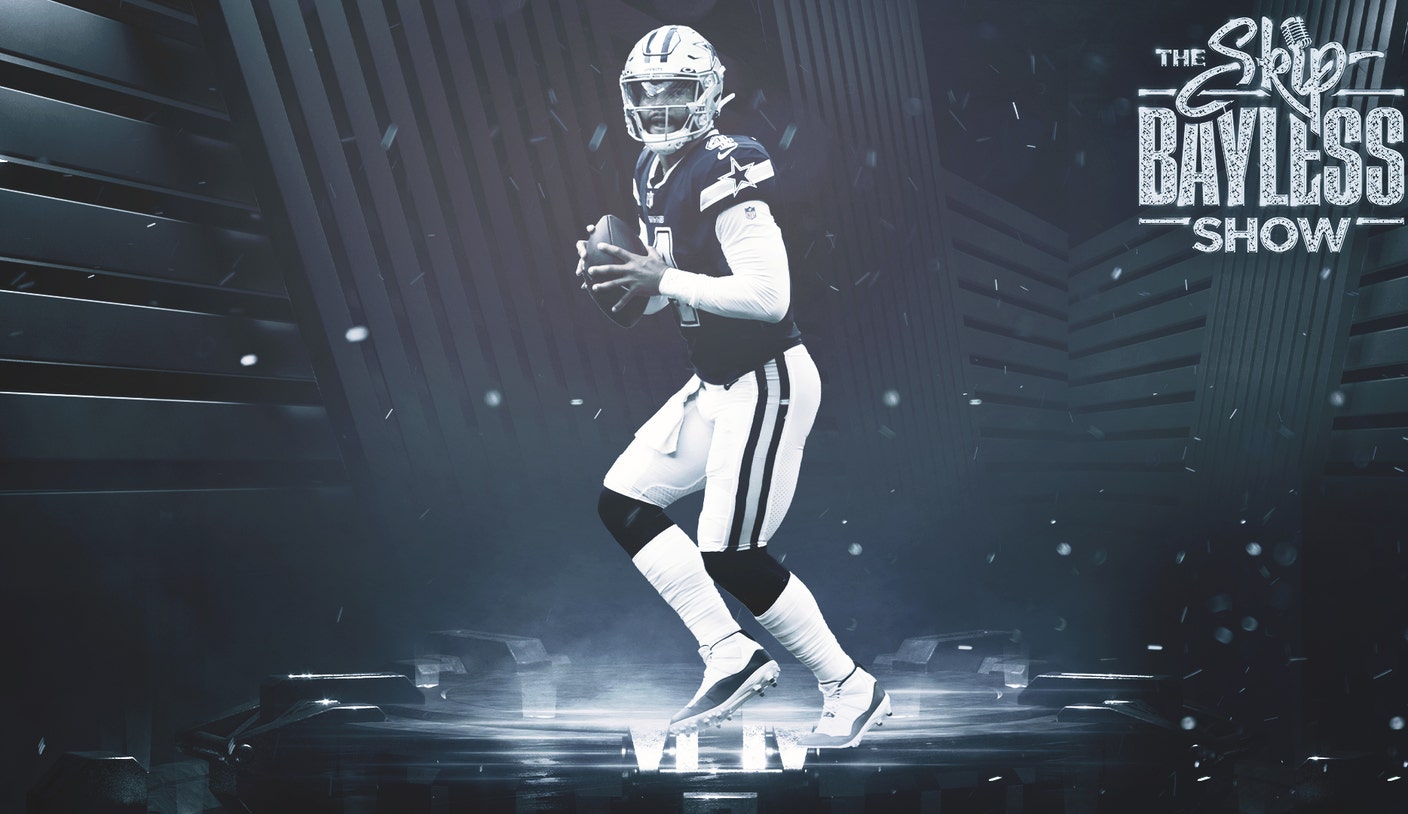 “The Skip Bayless Show” is here, and it’s already getting good.

Bayless is now the host of his own podcast, and the debut episode jumped right to the main event of the week: the Dallas Cowboys‘ playoff opener Sunday and the expectations for quarterback Dak Prescott against the 49ers.

Skip Bayless on his conflicting feelings for Dak Prescott

Skip Bayless explains how Dak Prescott became “his guy,” despite frustrations along the way.

“I will kick it off with — not to be skipped — the subject, Rayne Dakota Prescott. My quarterback. My guy Dak,” Bayless said. “As you might or might not know, I’m a lifelong, die-hard Dallas Cowboys fan. … I can’t help myself when it comes to my Cowboys, as you know from watching ‘Undisputed.’ No one on television has defended and applauded Dak Prescott more than I have, and no one on television has been more frustrated than I have by Dak Prescott.”

But Bayless’ relationship with Prescott stretches far beyond the bounds of the gridiron. He promised unfiltered, never-before-heard anecdotes on the podcast, and his story about Prescott’s favor for his show delivered on that guarantee.

“I convinced our people here at FS1, ‘Let’s do a commercial on Dak.’ In the commercial, I’m raving about Dak, Shannon’s laughing at me about Dak. We shot it on a Saturday early in the season. Following day, Dak at Denver, Broncos 42, Cowboys 17. I couldn’t recognize him. What happened to my guy?

“Later that year, Zeke took his suspension, Cowboys fell by the wayside, as did that commercial. Dak let me down. Made me look like a fool.”

It was the ensuing trouble after that loss that led Bayless to one of his lowest moments as a Cowboys fan.

“Next year opens, 2018, my Cowboys fall to 3-5. Is that possible with Rayne Dakota Prescott at the reins? 3-5? It was a Monday night at Jerry world against Tennessee. Titans 28-14, Dak was awful. When the game ended, I took my No. 4 jersey, my wife Ernestine followed me, taping me as I threw it in the trash.

“If you had told me that night, that fairly soon, Jerry Jones would pay Dak Prescott $75 million to play quarterback for one year for the Cowboys, I would’ve thrown you in the trash!”

Bayless didn’t only talk about the Cowboys on his debut episode, however. He also touched on Antonio Brown, the tempestuous receiver who was recently released by the Tampa Bay Buccaneers. Bayless shared a story about changes he saw in Brown over the course of a couple of years and his inability to connect with the star.

“I was open to connecting with Antonio and we just couldn’t,” Bayless said. “He didn’t really want to know me, he just wanted to be on my show. … It felt like AB was not himself anymore, he was a reflection of what was in the mirror. … It felt like AB’s feet were off the ground.”

Skip Bayless recalls running into Antonio Brown ahead of the Facebook Live incident.

Bayless has never been one to mince words about his Cowboys, Brown, or anything else for that matter, and in his new podcast, fans can expect to see a version of him unlike any they’ve witnessed before.

The first episode is available now. You can listen to the full-length airing here by following the link below:

Get more from Dallas Cowboys Follow your favorites to get information about games, news and more.