Staff at High Caliber Karting and Entertainment got ready to reopen the business three times in the last seven months of the COVID-19 pandemic. 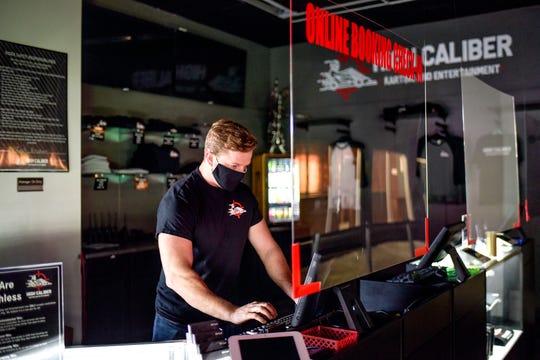 President Jordan Munsters works at a computer behind a partition recently installed to reduce the possible spread of infection on Monday, Oct. 5, 2020, at High Caliber Karting and Entertainment in the Meridian Mall in Meridian Township. (Photo: Nick King/Lansing State Journal)

Each time, in anticipation of what they hoped would be an easing of Gov. Gretchen Whitmer’s executive orders, employees were rehired and trained on safety protocols, and the venue’s approximately 80,000 square feet at the Meridian Mall was sanitized and prepped, Jordan Munsters, founder and president, said.

Twice those efforts were put on hold, and in mid-August the business lost out on $60,000 it had invested in creating an outdoor entertainment space when the Ingham County Prosecutor’s Office issued a cease and desist letter, Munsters said.

“It was going to be eight lanes of bowling, inflatable archery tag, we had about 40 different patio sets with umbrellas, we’d gotten a mobile bar,” he said, and the area was going to be covered by huge shade sails.

The order, which stated High Caliber Karting had violated one of Whitmer’s latest executive orders, banned the outdoor activities.

“So all of that expenditure just literally went into nothing,” Munsters said. “That was hard. When we got the cease and desist letter, everyone on staff, it took their morale to the ground.”

High Caliber Karting will open its doors Friday, one of several entertainment venues and movie theaters in the Lansing area making the move this month after Whitmer’s executive orders closed them to the public nearly seven months ago. 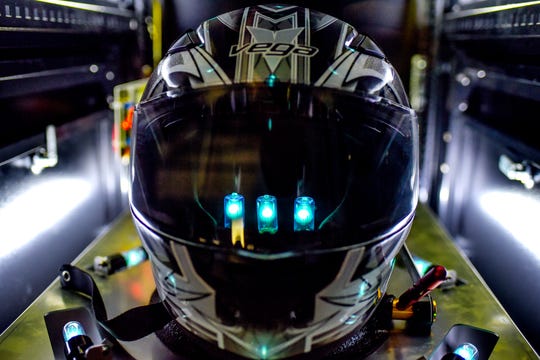 A helmet is cleaned with infrared light in a helmet sanitation machine on Monday, Oct. 5, 2020, at High Caliber Karting and Entertainment in the Meridian Mall in Meridian Charter Township.  (Photo: Nick King/Lansing State Journal)

Their closures have been difficult, say their owners and managers, but opening now comes with real challenges.

Movie theater and multiplex owners say they were closed during what is typically one of most profitable seasons — summer — and now new film choices are limited because studios aren’t yet releasing blockbusters. Celebration Cinema and NCG Cinemas planned openings come on the heels of an announcement by Cineworld, which owns Regal Cinemas, that it won’t open its U.S. theaters this year. The company indicated the closures are temporary but no reopening date has been set.

Those in charge at venues like High Caliber Karting and Launch Trampoline Park in Okemos say they have been ready to open for months, but it will take time and steady customers to make up for the months-long closure. Rebounding is the goal, they say, but the reality could be something else.

“We still may not survive it,” Munsters said. “We’re going to move forward like there’s no chance of failure at all because the last thing to die is hope, but we’re not out of the woods.”

The news that Regal Cinemas locations, including one in the Lansing Mall, won’t open this year was “sobering,” said Emily Loeks, director of public relations and community affairs for Studio C, which owns Celebration Cinema.

“This had been about as challenging a year as you can possibly imagine,” she said. “And yet we think we are in a little bit of a different position because we own most of our theater properties as opposed to them being leases.”

Celebration Cinema Lansing is among the theaters the company will reopen Friday. Smaller venues, including its Studio C location in Okemos, won’t open for a few more weeks, Loeks said.

At the Lansing location guests can expect reserved seating that will space groups apart from one another in auditoriums, reduced capacity and mask requirements except when customers are seated during a movie.

The theater will be waiving any fees attached to purchasing tickets online in advance of a show. Guests can purchase popcorn, candy and drinks online as well and they will be delivered to their seats in the auditorium.

Other locations the company owns in Indiana, Georgia and Florida opened in June, he said, so management and staff know first-hand what it takes to open safely. They also know to expect fewer moviegoers.

“It’s been a little bit slower due to the fact that we are waiting for some of the bigger studios to release new films,” Dilts said.

Customers can expect to see “Tenet,” “Unhinged,” and “The New Mutants” at local multiplexes in the next month.

Some blockbusters, including Marvel’s “Black Widow,” have been pushed to next year “Wonder Woman 1984” and Disney Pixar’s “Soul” are slated for release in November and December.

At Charlotte’s Eaton Theatre owner Leann Owen is worried those film release dates will be pushed to next year.

“We need new movies to do well,” she said. “You want a big family film. You want an ‘Avengers’ to open up with because there are still a lot of people who are afraid to come in.”

For now Owen will open her small theater Oct. 10-11 with “Kung Fu Panda.” A GoFundMe campaign aimed at raising money for repairs on a projector has exceeded $4,000, Owen said, but her theater needs bigger films to open.

“It’s going to be pretty rough even if ‘Wonder Woman’ stays at Christmas and we can open up and start doing the bigger films,” she said. “I think it will be spring before we’re back to normal.”

Lisa Robitaille, who owns the Sun Theatre in Williamston, said her theater won’t open for a few more weeks. She wants to see how other theaters do before reopening, she said.

Robitaille said playing older films is expensive — theater owners have to pay royalty fees to show them — and with reduced capacity she worries about covering building expenses.

An old fashioned sign urging customers to buy snacks during intermission above the door inside the Sun Theatre in Grand Ledge on Monday, July 13, 2020. The theater has been closed since mid-March. (Photo: Rachel Greco/Lansing State Journal)

Sun Theatre in Grand Ledge won’t open yet, owner Chuck Pantera said. There are no big movies to show right now, he said, and it will be a while before they are available.

“Hollywood won’t release new movies until they are showing in New York and L.A.,” Pantera said.

Right now the benefits of opening don’t outweigh the risks associated with spreading COVID-19, he said.

“I don’t see my theater opening until after Thanksgiving and it might be next year,” Pantera said. “I don’t want to contaminate anyone. It’s not worth it to me.”

COVID-19 outbreaks at Lansing eateries minimal, but most people dining outside

At Lansing’s newest café, Turkish food is the focus

Presidential race winner may sway other races in Eaton County

Large venues are ready and hopeful

Launch Trampoline Park opened its 35,000-square-foot location in the Meridian Mall in January of last year. 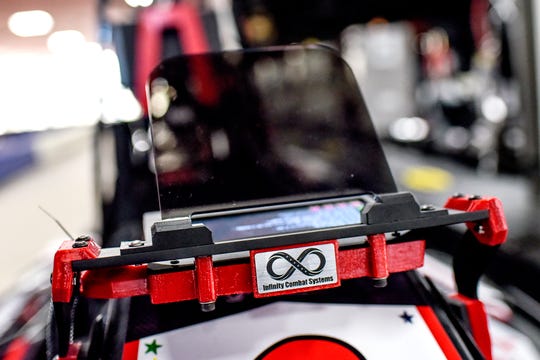 The display of the new Infinity Combat Systems component to go-karts on Monday, Oct. 5, 2020, at High Caliber Karting and Entertainment in the Meridian Mall in Meridian Charter Township. The laser-tag-like systems allows people to shoot light at other go-karts causing them to slow down and simulating a battle. The go-karts also have a shield button that allows a driver to block the shots from other karts. (Photo: Nick King/Lansing State Journal)

Launch will open Oct. 16, Terry said, with increased sanitation, limited entrances to its trampolines and reduced hours. The venue’s “battle beam” above a large foam pit won’t be open, social distancing will be required and masks probably will be too, Terry said.

“We’re going to take it day by day because we’re going to learn a lot in the first 30 days,” he said. “We just want people to have fun and feel safe coming to Launch.”

At High Caliber Karting the doors open Friday. Cleaning will be constant, masks will be required and groups will be kept six feet apart.

There’s a few new attractions too — archery tag and combat karting (think real-life Mario Kart played while riding go-karts at up to 30 miles per hour). Munsters created and perfected the latter during the closure.

What’s on hold, until next year at least, is High Caliber Karting’s expansion into four additional storefronts adjacent to its location inside the mall, Munsters said.

Other indoor go-kart venues in the Midwest that opened over the summer have seen a 50% reduction in customer traffic, according to Munsters, and he expects the same. Still, he said, customers are crucial.

“At the end of the day we’ve got to get people here.”

The next year will be rough, Munsters said, but 2020 hasn’t been any easier on him.

In April Munsters was injured in a dirt bike accident when a ramp on his property outside Charlotte collapsed. The bike he was riding was traveling at 40 miles per hour when it happened. Munsters broke three ribs, four vertebrae and his right hip and spent more than two weeks at Sparrow Hospital.

Five months later Munsters is walking, albeit with a limp, and still suffers from nerve damage and a limited range of motion. The accident was a lesson he said he needed.

“You can’t control everything,” Munsters said. “Yes, it made it everything harder, but it gave me a lot of purpose. It’s not business as usual.”