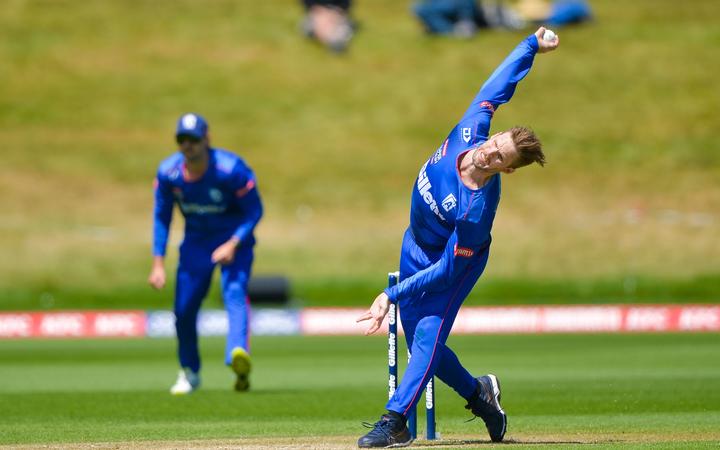 Latest – Black Caps fast bowler Lockie Ferguson has fired the Auckland Aces to an eight wicket win over the Otago Volts in their T20 Super Smash game in Queenstown.

Ferguson turned in his best performance for the side taking four wickets for 19 runs from four overs as he helped restrict Otago to 129-9.

Mark Chapman then hit 55 off 42 balls as the Aces reached their targe with almost three overs to spare.

Auckland have joined Canterbruy and Central in second spot in the standings, behind leaders Northern, while Otago are bottom of the table.

Meanwhile Suzie Bates scored an unbeaten 89 as the Otago Sparks beat the Auckland Hearts by 45 runs to return to the top of the women’s standings.

Today’s double header is between Central and Northern in New Plymouth.

Meanwhile Bangladesh made 269/8 in reply to the New Zealand Elevens 146/7 in their two day practice game in Mt Maunganui.

Phoenix have another game called off

The Wellington Phoenix men have had another A-League game postponed.

The Phoenix’s game against Brisbane next Wednesday has been postponed after the Roar became the latest club to report cases.

It is the third time the Phoenix men have had a change of schedule this season.

This weekend’s game against Adelaide is still on track with the possibility that their FFA Cup quarter-final against Melbourne City could now be played on the following Wednesday.

The Phoenix have not reported any Covid cases this season.

APL chief executive Danny Townsend said this week that it intends to finish the season on schedule and that clubs would be allowed to play during the international windows next month and in March to ease the pressure on the schedule.

South Africa captain Dean Elgar scored an unbeaten 52 against India as the hosts showed a dogged determination to stay in the fight on a spicy wicket and closed the fourth day on 94 for four in the first test at Centurion Park.

South Africa are still 211 runs off their record victory target at the venue of 305 on a wicket that is treacherous for the batsmen with sideways movement, but also variable bounce.

Some deliveries are staying low and others spitting off the surface with exaggerated bounce.

They will need to negotiate the skilful India attack on the final day as the tourists attempt to secure a victory on the way to a hoped for first ever series win in South Africa with tests in Johannesburg and Cape Town to follow.

The highest fourth innings score to win at Centurion Park is 251 for eight by England in 2000, an infamous test where both teams agreed to forfeit an innings after rain to force a result.

The next best successful chase is 226 for four by South Africa against Pakistan in 1998.

Arsenal manager Mikel Arteta will sit out this weekend’s Premier League game at home to Manchester City after testing positive for COVID-19.

Arsenal are fourth in the table on 35 points after 19 games, 12 points behind leaders City.

“Mikel is isolating in line with Government guidelines and we wish him well,” Arsenal said in a statement.

Arteta previously tested positive in March 2020, shortly before the pandemic forced the Premier League to shut down for more than three months.

A record 103 positive COVID-19 cases were found among players and staff in the Premier League over the past week following a raft of fixture postponements during the busy festive period.

Djokovic out of ATP Cup

Novak Djokovic has pulled out of the Serbia team for the ATP Cup in Sydney raising further doubts over whether the world number one will defend his Australian Open title next month.

There has been intense speculation over Djokovic’s participation in both events, with the 34-year-old, who is opposed to COVID-19 vaccinations, repeatedly declining to say if he has been inoculated against the virus.

Organisers of the Australian Open, which starts on Jan. 17, have stipulated that all participants must be vaccinated against the coronavirus or have a medical exemption granted by an independent panel of experts.

Owing to Djokovic’s current world ranking, Serbia received top billing for the 16-team event, which runs from Jan. 1-9, and have been drawn in Group A along with Norway, Chile and Spain.

Djokovic has won a record nine Australian Open titles, including the last three, and is in a three-way tie on 20 major titles with Roger Federer and Rafa Nadal in the all-time list.

His father Srdjan told a Serbian television channel last month that Djokovic would probably pull out of the major, saying Tennis Australia’s stance on mandatory vaccination was tantamount to “blackmail”.

Terry back at Chelsea

Former Chelsea captain John Terry will return to the Premier League club to begin a coaching consultancy role at their academy.

Terry won five Premier League titles and FA Cups plus the Champions League, when he was suspended for the 2012 final, and the Europa League at Chelsea from 1998-2017.

Chelsea said Terry will begin his new role in a part-time capacity at the start of next month.

Stosur to retire from singles

Sam Stosur will call time on her singles career at next month’s Australian Open, though she will continue to play doubles in 2022, the 37-year-old said.

The Australian player received a wildcard to play at Melbourne Park, where she has reached the singles fourth round on two occasions, in 2006 and 2010.

Tennis Australia said in a statement it would be Stosur’s 69th Grand Slam singles appearance in total – a record for an Australian player and the sixth most for any woman in history.

She beat Serena Williams in the U.S. Open final in 2011 and was a runner-up in the French Open a year earlier.