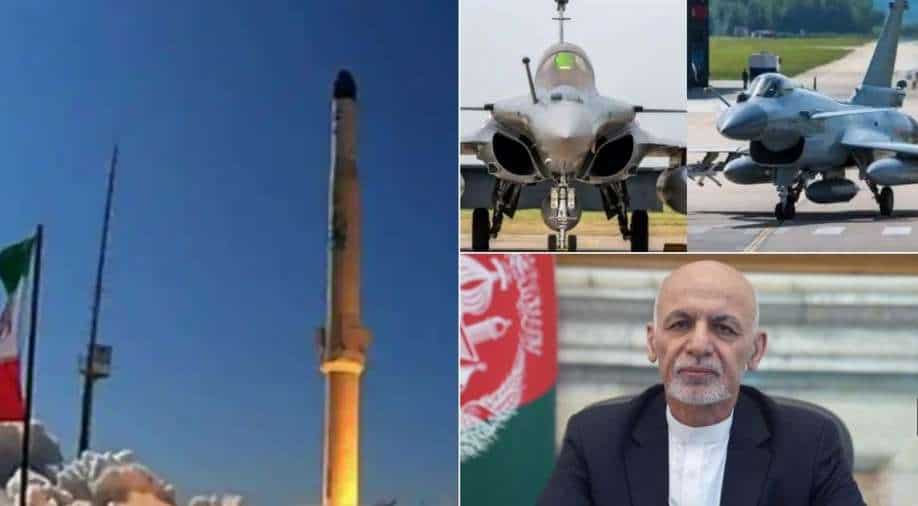 From Iran’s announcement of a new space launch to the Pakistani government confirming the purchase of at least 25 Chinese J-10C fighter jets for the Pakistan Air Force, read the top 10 world news headlines here. Click on the hyperlinked headlines to read the full report.

Iran said it has carried out a new space launch sending “three research cargos into space”. The launch comes as talks between Iran and Western powers over the revival of the 2015 nuclear deal has stalled.

As the tensions between China and Taiwan continue to escalate, Taiwan witnessed approximately 950 intrusions by the People’s Liberation Army Air Force (PLAAF) military planes into its Air Defence Identification Zone in 2021 so far, local media reported citing data from the Ministry of National Defense. There’s a reported 60 per cent increase from the previous year as intrusions in 2021 is double the combined sum of that in 2019 and 2020.

As the unsolved India-China border dispute brews tensions, new media reports allege that China is sending machine gun-wielding robots to the frontier to exacerbate the situation.

Two former senior editors of Stand News, a pro-democracy news outlet in Hong Kong, were charged with conspiring to publish seditious material, said authorities. This has come a day after about 200 police personnel raided the office of the online publication.

We are in the mood for a conversation, says Russia ahead of Putin-Biden phone call

Ahead of the phone call between President Vladimir Putin and US President Joe Biden, the Russian president’s spokesman said there is a “mood for a conversation” emphasising that differences can be resolved through talks.

Kim Jong-un is dieting ‘for the sake of the country’: Communist officials

When North Korean leader Kim Jong-un spoke at a Workers’ Party gathering, he appeared to have lost a significant amount of weight. Kim’s figure has shrunk dramatically in recent months, owing to rumoured food difficulties. According to South Korean estimates, Kim is roughly 170 cm tall and once weighed 130 kg—values that would put him in the obese category on the BMI (Body Mass Index) scale.

Amid a rise in coronavirus (COVID-19) cases globally, there are calls to ramp up the vaccination process. Also, experts around the world are urging people to get booster shots if they are eligible. Johnson & Johnson, after a clinical trial, found that its booster shot offered strong protection against the Omicron variant of the virus and reduced the risk of hospitalisation.

‘I have been made a scapegoat’: Ashraf Ghani recalls the day he fled Afghanistan, denies taking money

Former Afghanistan President Ashraf Ghani recalled the events and shared details when he fled the country as soon as the Taliban fighters entered the gates of Kabul on August 15. The 72-year-old faced strong criticism for fleeing the country and leaving the cirizens behind in dire straits amid a chaotic evacuation of troops by the West.

The Pakistani government has confirmed the purchase of at least 25 Chinese J-10C fighter jets for the Pakistan Air Force. Sheikh Rashid, Pakistan’s interior minister, told reporters in Rawalpindi on Wednesday that a squadron of 25 Chinese-made jets would do a flyover on March 23.