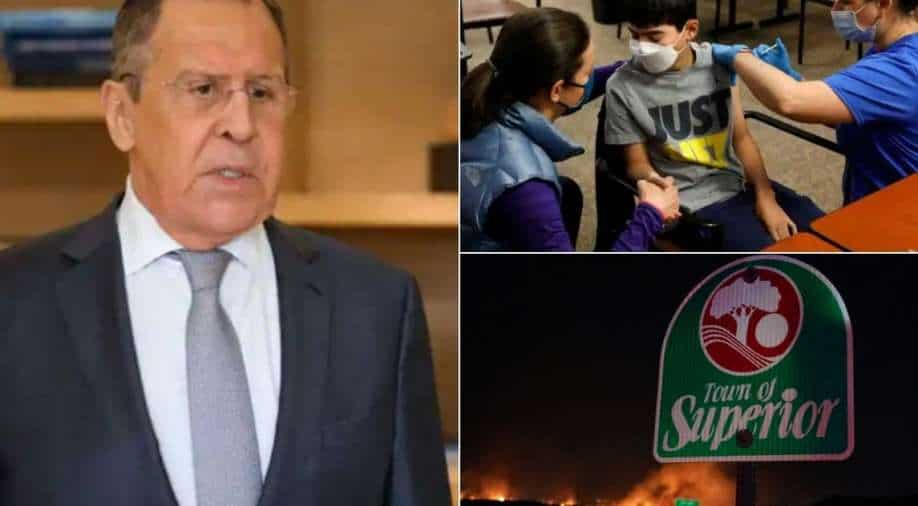 Russian foreign minister Sergey Lavrov has said that Russia will be forced to take measures to eliminate unacceptable threats if the United States and NATO don’t respond to Moscow’s security proposals. Also read the report on Covid hospitalisation among children is rising in US. Don’t miss our yearender on world events that defined 2021. Click on the links to read the full report.

Covid hospitalisation among children is rising in US as the country continues to shatter record Covid cases due to Omicron wave, with 355,990 new infections being reported every day in the past week. Data from the US Centers for Disease Control and Prevention (CDC) showed on an average 378 children were being admitted to the hospital with COVID-19 in the past one week.

Hundreds of homes have been destroyed by the fast-moving wildfires in the US state of Colorado. It has also forced at least 33,000 people to flee, as per the officials. Local media outlets have reported that at least six patients were hospitalised with injuries and people in the towns of Louisville and Superior were told to flee. The National Weather Service (NWS) described the situation as “life-threatening.”

Russia test-fired around 10 new Tsirkon (Zircon) hypersonic cruise missiles from a frigate, Interfax news agency reported on Friday. The report added that two more were test-fired from a submarine.

The Chinese embassy has shot off an angry letter to some Indian members of parliament (MPs) who attended a meet organised by the Tibetan govt in exile. The Indian MPs who participated in the meet were – Jairam Ramesh, Manish Tiwari, Sujeet Kumar, Rajeev Chandrashekhar, Ramdas Athawale, Maneka Gandhi.

An armed 25-year-old man was arrested who was on his way to the White House carrying a rifle and a ‘hit list’ which had names of President Joe Biden and the country’s medical advisor Dr Anthony Fauci. According to reports, Kuachua Brillion Xiong had an AR-15–type rifle, ammunition, and body armour when he was pulled over for driving aggressively on December 21 in Iowa state.

In a shocking incident in US, man shoots dead own daughter after mistaking her for intruder

A shocking incident has been reported in the United States as a man in Ohio shot dead his own 16-year-old daughter after mistaking her for an intruder, local police said Thursday (December 30). As per the media reports, the incident happened around 4:30am (local time) on Wednesday at a home near Canal Winchester on Piper Bend Drive.

In a remarkable effort, some local administrations in Spain have come up with menstrual leave for its staff. This seems to be one of the first attempts to come up with such a leave in western Europe.

Tesla Inc is recalling more than 475,000 of its Model 3 and Model S electric cars to address rearview camera and trunk issues that increase the risk of crashing, the U.S. road safety regulator said on Thursday. The National Highway Traffic Safety Administration (NHTSA) has been discussing another camera issue with the automaker, while probing the company’s driver assistant system.

Politics and money never sleep, they say. Years come and go but things innate to human nature never cease to exist. This is not to say that all peace efforts are futile. But it just underlines the fact that the interplay of good and bad goes on and on. But then, who is to say what is absolute good and bad when it comes to politics? Everyone claims it’s a matter of perspective.