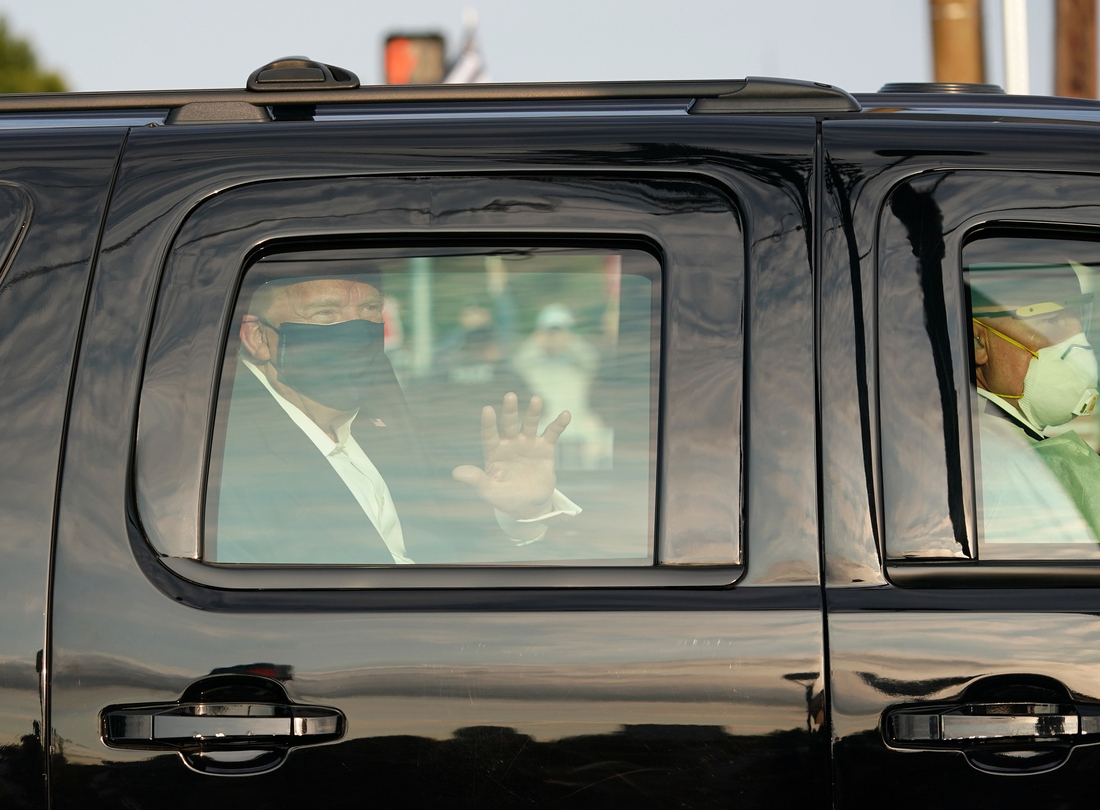 Despite public health recommendations that people infected with the coronavirus isolate themselves to prevent further transmission, President Trump rode with Secret Service agents past his supporters outside Walter Reed National Military Medical Center on Sunday. 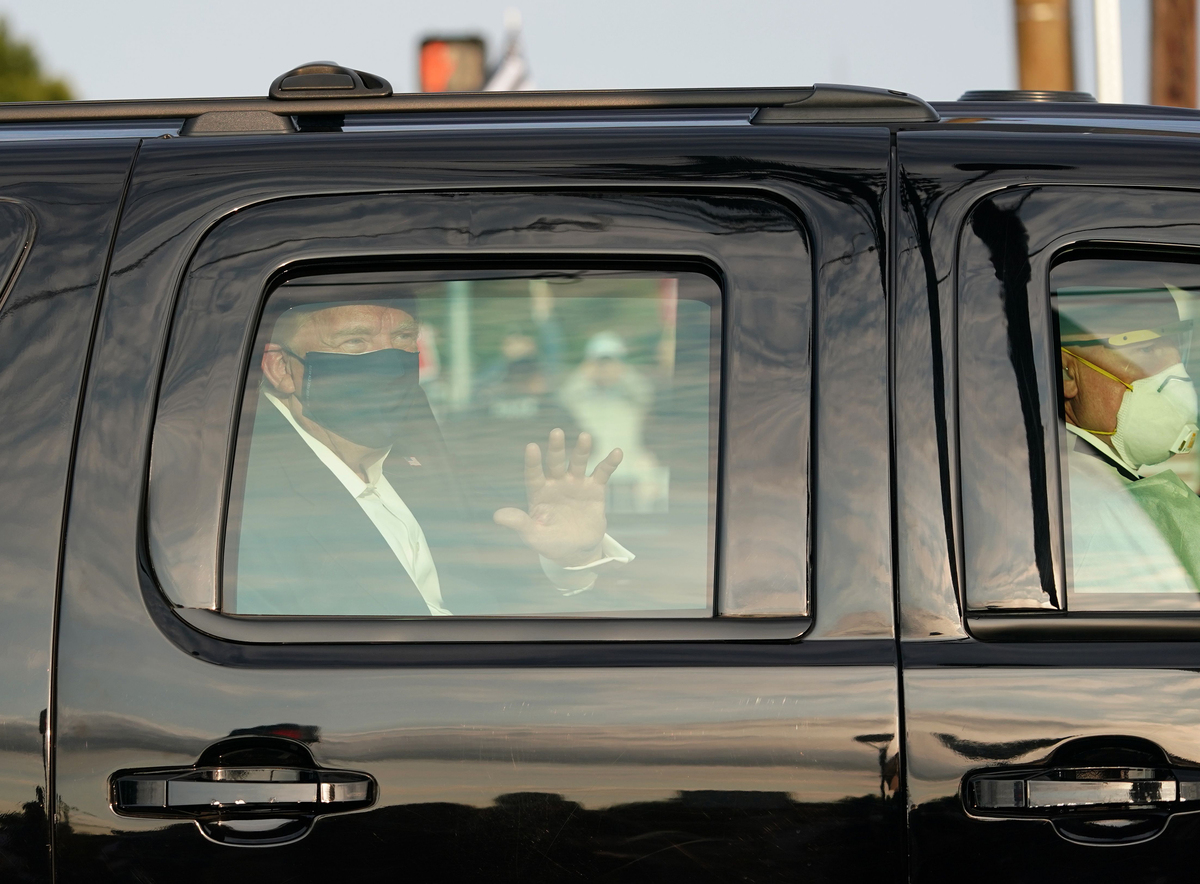 Despite public health recommendations that people infected with the coronavirus isolate themselves to prevent further transmission, President Trump rode with Secret Service agents past his supporters outside Walter Reed National Military Medical Center on Sunday.

Last Thursday afternoon, when Hope Hicks tested positive for coronavirus, President Trump was aboard Marine One, on his way to a campaign fundraiser at his New Jersey golf club.

Hicks, a top Trump aide, had traveled with the president to a Minnesota fundraiser and rally the day before and reportedly felt ill on the plane ride back. “The CDC guidelines are pretty clear when you identify [someone] who is infected,” says Howard Koh, former assistant secretary of health in the U.S. Department of Health and Human Services in the Obama administration.

Anybody who had recently come in close contact with Hicks — defined as spending more than fifteen minutes within six feet of her, in the past two days — is to take precautions so they don’t spread the virus to others. “I assume the president was one of those persons,” Koh says, “And according to the guidelines, the quarantine should have started at that point, for 14 days.”

Instead, Trump greeted over 200 supporters at the New Jersey fundraiser, flew back to Washington, and mingled with dozens of aides. A few hours later, the President tweeted that he and First Lady Melania Trump had also tested positive for coronavirus.

From the time Hicks began showing symptoms of COVID-19, the Trump campaign and White House repeatedly made missteps that health experts say dangerously amplified the risks of spreading the virus to others.

The president’s failure to quarantine was a critical crossroads when the president and his team chose to flout rather than follow pandemic safeguards — a path they have stuck to, even as test results showed the virus spreading through the White House. The White House has declined to do contact tracing of a Rose Garden celebration held several days before Trump and other Republican attendees tested positive. And the president has struggled to balance the public health recommendation to isolate with his desire to be seen publicly as Election Day approaches.

Much of the New Jersey fundraiser took place outdoors, which reduces the risk of transmission. But Trump also reportedly met indoors, with a select group of around 19 top donors for 45 minutes. While the donors sat indoors more than six feet apart, according to CNN, nobody wore masks — which increases the risks of the virus accumulating in the air and spreading to people more than six feet away.

“If you’re indoors, basically, you’re all sharing the air in that room,” said Kim Prather, an aerosols scientist at UC San Diego, in a call with reporters this week, “We always have to remember that some masks are absolutely essential when you’re indoors.”

New Jersey Governor Phil Murphy says, via Twitter, that health officials are working with the CDC to contact and monitor everyone who showed up to the fundraiser. Attendees are being advised to quarantine and monitor themselves for symptoms for two weeks. But some attendees do not plan to comply.

That’s another consequence of the president’s defiance of public health safeguards, says Lindsay Wiley, a health law professor at American University: “It just sends such a strong signal to the general public that these recommendations aren’t important to pay attention to and aren’t necessary to follow.”

It’s risky, because the CDC’s public health guidance contains tried-and-true recipes for dealing with coronavirus outbreaks in the absence of vaccines and therapeutics. Since no cures or prophylactics are available, the public health guidance focuses mainly on preventing the spread of coronavirus, through measures such as mask-wearing, improving fresh air flow indoors, testing likely cases and keeping people who may be infected away from others.

Once the president was diagnosed with coronavirus, public health guidelines dictate that he should be isolated. “That means nobody around him for ten days,” the duration after symptom onset when he’s most likely to be contagious, says Dr. Ali Khan, dean of the college of health at the University of Nebraska Medical Center.

But the president, in between medical treatments at Walter Reed National Military Medical Center, took a ride down the street in a sealed SUV, exposing his Secret Service bodyguards to coronavirus in the process. “[Not isolating] is an advantage and a privilege of his office that is not afforded to pretty much any other American,” Khan says.

When the president was diagnosed, anybody who had come in close contact with him — or any other recently confirmed cases — should also have quarantined for fourteen days. “The only exception for that is, occasionally, essential workers,” Khan says, adding that the exception was originally meant for health care workers at low risk of being infected, who would be wearing full protective gear around patients. The administration has since expanded the definition to sixteen industries, including law enforcement and agriculture.

White House Press Secretary Kayleigh McEnany described herself as an “essential worker” and continued to speak with reporters while not wearing a mask. McEnany said she had trusted that negative test results meant she was not carrying the virus. Then, on Monday, McEnany announced that she, too, had tested positive for coronavirus.

“It appears that the White House has declared themselves essential workers that are not subject to quarantine rules,” Khan says.

The outbreak among the president’s circle demonstrates that relying solely on routine testing is an imperfect strategy. People are prone to false negative results in the early stages of infection, when they can still spread the disease, says Dr. William Lang, former director of the White House Medical Unit and deputy physician to president in the George W. Bush administration.

The president returned Monday evening to the White House from hospitalization at Walter Reed National Military Medical Center, still in recovery from COVID-19 and well within the window of being contagious. In a statement, White House spokesman Judd Deere said “Physical access to the president will be significantly limited and appropriate PPE will be worn when near him.”

But the list of people in the president’s circle testing positive grows daily, and it’s not clear to observers that those exposed will quarantine. Further, the President says he plans to proceed with a scheduled debate in Miami on October 15 with presidential candidate Joe Biden, which is fine by CDC guidelines, so long as the president’s symptoms resolve.