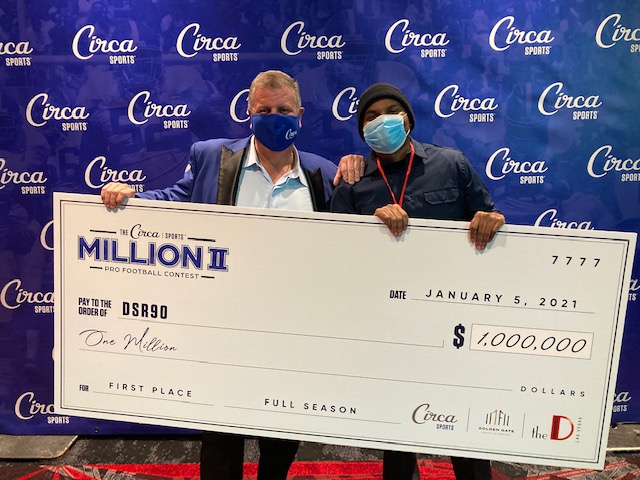 LAS VEGAS — Dakota Shawn Reed’s $1 million win in Circa Sports Million II showed how great football handicapping contests are at leveling the playing field so that a regular fan can compete with professional gamblers, even if for just one glorious life-changing season.

Reed was born and raised in Las Vegas and DSR90 is simply his initials and his birth year. The 30-year-old cook lost his job due to the COVID-19 pandemic and hasn’t been able to find a job since. He used $1,000 of his savings to enter Circa for the first time with his only prior contest experience being a few years ago in the Westgate SuperContest.

Circa held a cocktail party in the Detroit Ballroom at the D Hotel-Casino in downtown Las Vegas on Friday night. When Circa VP Mike Palm called Reed to the stage and asked how he pulled off his impressive feat, Reed replied, “Just luck.”

In a later interview, when asked if he had cashed or been in contention in his previous contest tries, the man of few words just laughed and emphatically shook his head. Reed said he didn’t do anything different this time and didn’t have any special program or methods; he just picked his five best games each week.

But that was good enough.

“I didn’t really look at [the standings] until the last three weeks,” Reed said. By that time he was in the Top 3 and going toe-to-toe with former leaders ODBMG-2, ALBO-1 and PRESENCE-2. After Week 16, Reed was in second place, just half a point behind ODBMG-2.

Reed used four early games on this past Sunday’s Week 17 card and went 3-1 with wins on the Ravens -12 vs. the Bengals, Buccaneers -7 vs. the Panthers and Steelers 8.5 vs. the Browns while losing with the Dolphins 1 at the Bills, but it was enough to put him atop the leaderboard.

“After the first three wins, I knew I’d be winning one of the big prizes,” Reed said.

Reed’s final play was on the Texans 7.5 vs. the Titans. He knew from looking at the other top contenders’ plays that he could clinch against DV8-1, who had the Titans -7.5, and then all that was needed was for ODBMG-2 to lose their play on the Seahawks -6 vs. the 49ers.

The Texans fell behind 17-6 and 25-9, but rallied to get comfortably within the spread and actually took a 35-31 lead early in the fourth quarter before eventually losing 41-38, but still covering for Reed. Meanwhile, the Seahawks were looking terrible early against the 49ers and Reed thought he had the contest won. However, Seattle scored 20 unanswered points in the fourth quarter to take a 26-16 lead on Alex Collins’ 8-yard TD run with 1:49 to play.

“I didn’t start sweating until the Seahawks started winning,” Reed said. “When he [Collins] was going in, I was cheering for him to go down.”

Instead, that put the Seahawks over the spread for ODBMG-2. However, the 49ers had plenty of time to drive down the field. If the 49ers had kicked a field goal, ODBMG-2 would have still won the contest, but C.J. Beathard threw a 3-yard TD pass to RB Jeff Wilson Jr. with 23 seconds left to hand the Circa Sports Million II title to Reed.

After DSR90’s victory was verified, Circa sent out a Tweet from its @CircaSports account offering to send a limo to pick up the champion (“For real”), but Reed said he didn’t see it until later that night as well as an email from the Circa staff. He accepted the offer to attend the awards ceremony/big-check presentations on Friday night in the Detroit Ballroom at the D Hotel-Casino in downtown Las Vegas.

While this was a victory for the regular football fan/bettor, no one is shedding any tears for the professional gamblers as, in addition to their $200,000 paydays for tying for second at Circa, Baker and Gregorich’s ODBMG2 entry won the SuperContest for $435,623.20 plus another $150,000 in quarterly winnings earlier in the season for a total haul of $785,623.20, while Zeniuk’s DV8-2 entry finished tied for fifth at Circa to earn an additional $33,333 and also shared in a nine-way tie for second in the Circa’s fourth quarter for another $11,111 for a total of $244,444 in contest winnings (plus another $12,000 won on a hedge bet).

In that 4th Quarter contest (actually on NFL Weeks 13-17), Matt Lowe, 35, of Tacoma, Wash., won the $187,000 top prize to score another victory for the “everyman.” Lowe was playing under the alias of Maiowe (“they made a mistake when putting in my entry as it was supposed to be MaLowe, just an abbreviation of my name, but I just went with it.”)

The Maiowe-1 entry wasn’t even in the Top 500 after Week 12 and Lowe wasn’t expecting to cash, but he then went 20-4-1 over the last five weeks of the contest. Lowe said he is in the wealth management field and is usually investing money for other individuals and companies, but now he has $187,000 to invest for a college fund for him and his wife’s 8-week-old daughter, who accompanied them to Vegas with a friend/nanny to celebrate this weekend.

Just another example of these high-end football handicapping contests paying off for the regular fan.