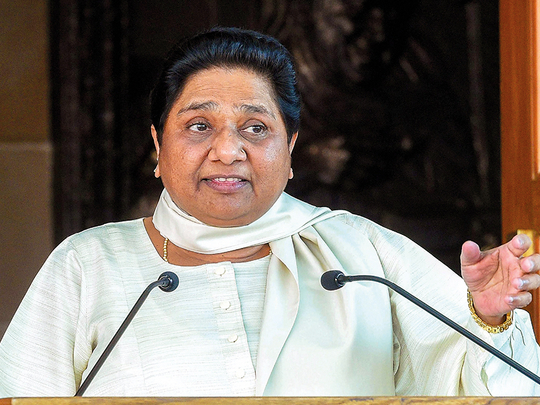 Her absence looms over the Uttar Pradesh elections now barely a month away. Mayawati universally addressed as “behenji” (sister), the first woman chief minister of UP and who held the office four times, has vanished from these polls.

Mayawati, 65, still has to hold her first public meeting for the elections scheduled for February and March. Her rivals including Prime Minister, Narendra Modi is in UP every other day launching some new scheme and dominating the headlines. A case in point: Modi’s grand show in Varanasi, where he even took a dip in the holy Ganges.

Mayawati’s party the Bahujan Samaj Party (BSP) is equally listless, beset by serial desertions and directionless as Mayawati cocooned in her palatial residence in Lucknow and Delhi barely meets any party functionary. The only contact the BSP has with their leader is through Satish Mishra, her trusted aide for many years.

Once Mayawati was a formidable presence looming over UP politics with her citadel of Dalit voters. This vote bank ensured that she could drive a hard bargain with other political parties and exert formidable pressure.

Her vote bank has suffered attrition as election after election the BJP has chipped away at her voters. By and large only her loyal Jatav voter (Mayawati’s own caste) is still with her. The BJP, by promising an extension of the “Hindu Samaj”, has since 2014 gotten a large chunk of the Dalit vote which has led to its formidable showing at the UP hustings.

Mayawati was once a firebrand, now she is a pale shadow of herself — a woman who made history in the caste ridden North Indian to rise to the top of the pile.

Priyanka Gandhi, who is leading the hobbled Congress effort in UP, has already publicly dubbed Mayawati the BJP’s “B team” as she tries to get the Dalit and Brahmin votes — an alliance cobbled up by Mayawati to ride to power.

Clearly Mayawati’s absence has made the BSP voter unhappy and wondering who to turn to. The other regional heavyweight — the Samajwadi Party led by Akhilesh Yadav is giving a tough contest to the BJP. Yadav, who addresses Mayawati as “Bua” (aunt), is loathe to comment on her absence. The BJP is happy that Mayawati is hardly putting up a fight in this the most contested of battles.

So what has made Mayawati vanish? Top level sources say that the cases filed by the Central Bureau of Investigation (CBI) of assets disproportionate to known sources of income are a huge deterrent. The federal government, which controls the investigative agency, dials up or dials down the pressure depending on the situation.

Of late Mayawati has not been feeling so well and is apparently terrified of the risk of contracting COVID-19. Mayawati lost her mother recently and that has also contributed to her being detached from the upcoming elections.

The electoral battle is not all. Despite, many instances of violence against Dalits such as the Hathras gang rape case, Mayawati has been quiescent. Her only protest being an occasional tweet. Says a senior BSP leader, “how many of our voters are on Twitter?”

The question is fundamental. The Dalits are worse off in the UP caste matrix and new claimants such as Chandrashekhar Azad, who earlier used to go by the moniker Ravan, and his Bhim Army are looking to occupy the space ceded by Mayawati.

Mayawati has always been a political enigma, marching to the beat of her own drum. She makes a virtue out of an element of surprise in her decision making — rotating favourites and throwing out leaders who she feels have started taking her for granted.

Her symbolic presence as the first woman Dalit CM of UP will remain but, this election could be career ending for her.

Swati Chaturvedi is an award-winning journalist and author of ‘I Am a Troll: Inside the Secret World of the BJP’s Digital Army’.