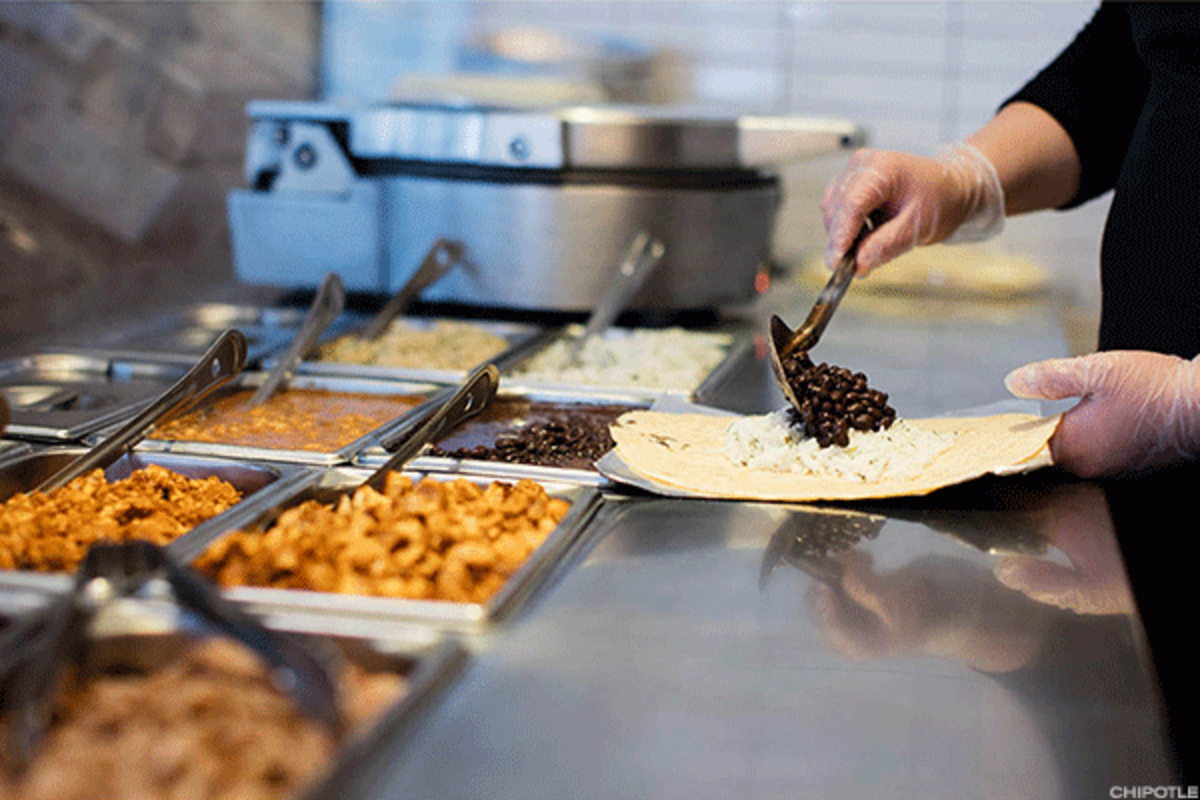 Under Chief Executive Brian Niccol the burrito giant occasionally, and carefully, tinkers with his menu. In March, TheStreet reported, Chipotle made a huge change to one of its core menu items for the first time in its nearly 30-year history. It introduced pollo asado alongside its traditional chicken.

On social media, the company recently connected with Karl Jacobs, a YouTuber with millions of followers, to promote a particular burrito. That effort harked back to two promotions with National Basketball Association legends: McDonald’s  (MCD) – Get McDonald’s Corporation Report with Michael Jordan and the Shaq-A-Roni pizza at Papa John’s  (PZZA) – Get Papa John’s International, Inc. Report, named for Shaquille O’Neal.

But it also innovates by itself and with tech partners.

In March, Chipotle unveiled Chippy, an autonomous kitchen assistant. The company partnered with Miso Robotics of Pasadena, Calif., “to customize its latest robotics solution to cook and freshly seasons its tortilla chips.”

“We are always exploring opportunities to enhance our employee and guest experience,” Chief Technology Officer Curt Garner said then in a statement. “Our goal is to drive efficiency through collaborative robotics that will enable Chipotle’s crew members to focus on other tasks in the restaurant.”

The company also said that “technology deployed consistently and correctly can improve the human experience.” The company noted that it was again leveraging artificial intelligence with a chatbot, called Pepper, through the Chipotle app and chipotle.com.

Well, innovations have to come from somewhere and get funded. And when a company’s pockets are as deep as Chipotle’s, perhaps there’s no better way to do that then by starting up a venture capital firm.

The Newport Beach, Calif., chain has formed Cultivate Next, a venture firm that will make early-stage investments into innovative restaurant technology.

Chipotle is putting up the entire $50 million in the fund.

The company said the fund would focus on companies from the seed stage to Series B “that can accelerate the company’s strategic priorities such as running great restaurants, amplifying technology and innovation, further advancing its Food With Integrity mission, and expanding access and convenience for customers.”

Chipotle declined to say specifically who would run the fund. A spokeswoman emailed that “[executive] leadership will be responsible for approving investment decisions. However, dedicated individuals will be overseeing the new venture fund on behalf of Chipotle.”

Other examples of where Chipotle is working on technology include what it said was a new scheduling tool that uses machine learning to build more effective schedules. (The company employs more than 100,000 people and at year-end operated nearly 3,000 restaurants.)

Scheduling is a particularly sore point for hourly workers in fast food and coffee bars. Many people complain that they are not given enough notice of schedules and otherwise lack flexibility in their work time.

And Chipotle a bit more than a year ago said that it had put funding into the Series C round of Nuro, the Mountain View, Calif., autonomous-delivery company. Nuro “uses robotics in their fleet of on-road, occupantless and autonomous vehicles to deliver everyday consumer goods,” Chipotle said. Digital orders and delivery are a huge and integral part of Chipotle’s sales strategy.

This, the company said at the time, was its first significant investment in a third-party technology company.

Chipotle is not alone in putting money into food-industry innovation.

In March 2019 Starbucks, the Seattle coffee-bar giant put down a $100 million commitment to Valor Siren Ventures I LP.

Starbucks said the fund would “serve as a growth driver for the next generation of food and retail startup technology companies.” The fund is managed by the Chicago private-equity firm Valor Equity Partners.

Starbucks also said it would “explore direct commercial arrangements” with the startups that emerged from the fund’s efforts.

And of course, there’s CafeX and its robotic coffee bars in California.