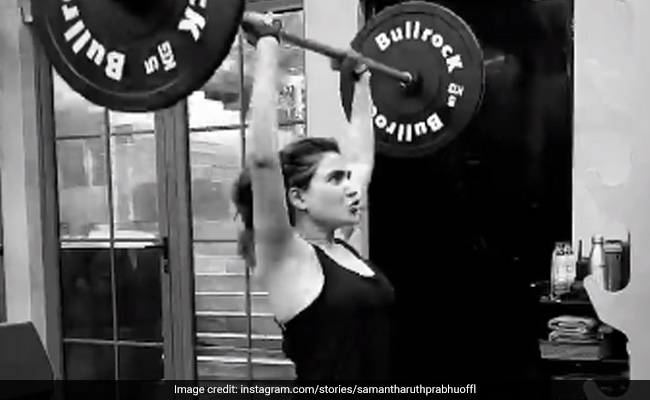 Samantha Ruth Prabhu has quite a bit of a reputation as a fitness enthusiast and she loves to share posts from her workout diaries on her Instagram profile. The actress shared glimpses from workout session on her Instagram stories and intense can’t even begin to describe it. In the greyscale videos, Samantha can be seen lifting weights with utmost ease. “Work out to eat,” Samantha wrote, tagging her fitness trainer Junaid Shaikh. In the next story, the actress posted a picture of samosas. In the backdrop, Samantha could be seen smiling with all her heart.

Samantha  will soon work with Downton Abbey director Philip John in a project titled Arrangements Of Love. In the film, Samantha will play the role of a bisexual character, who runs her own detective agency.

Samantha Ruth Prabhu and actor Naga Chaitanya, announced separation in October this year. They were married for over 3 years.

On the work front, Samantha Ruth Prabhu will next be seen in Kaathuvaakula Rendu Kaadhal and Shaakuntalam. The actress made her big digital debut with The Family Man 2 and she made headlines for her role as Raji, an unwavering Sri Lankan Tamil liberation fighter on a suicide mission in the series. She has starred in films like Manam, Ye Maaya Chesave, Autonagar Surya, Majili and Oh Baby to name a few.