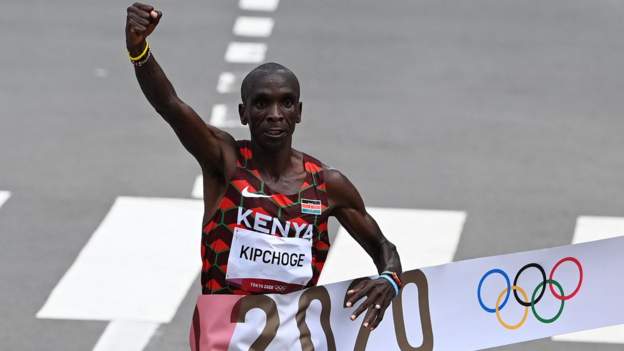 He’s the marathon world record holder and the only man to have run the distance – albeit unofficially – in under two hours but not until he defended his Olympic title in September did Eliud Kipchoge believe he had secured his sporting legacy.

The 37-year-old clearly has far higher standards than most of the sporting public, many of whom already considered the Kenyan to be the greatest male marathoner in history.

Quite aside from his long list of successes, his win in Sapporo, Japan, saw him join an elite group of runners, becoming just the third person to retain an Olympic marathon title.

Only legendary Ethiopian runner Abebe Bikila in the 1960s and East Germany’s Waldemar Cierpinski, in 1976 and 1980, have managed the same feat as Kipchoge, a nominee for BBC African Sports Personality of the Year.

“It was my best moment to win the gold in Olympics back-to-back,” Kipchoge told BBC Sport Africa. “I’ve done a lot, but the Tokyo 2020 gold cemented everything. It cemented what I’ve been doing.”

His victory – achieved with the biggest winning margin in the men’s Olympic marathon in five decades – was so impressive it persuaded the International Olympic Committee to select Kipchoge as their male athlete of the Games.

The fact the Olympics was staged at all tapped into a central theme of Kipchoge’s character, namely the belief that anything is possible.

“It was really crucial to give us hope and tell everybody that as human beings, luckily we have enough knowledge and power to overcome any uncertainty,” he said.

It’s hardly a surprise Kipchoge is so keen on breaking new ground, as it has been a prominent feature of his career.

Kipchoge’s gold in Japan was his fourth Olympic medal overall, with the former 5000m runner having taken a bronze and silver in the 2004 and 2008 Games respectively.

The medals add to a resume that includes the official marathon world record of two hours one minute and 39 seconds, which he set in Berlin in 2018 when improving the old mark by a staggering 80 seconds.

One year later, he ran the first-ever sub-two hour marathon, in assisted conditions, as part of the INEOS 1:59 Challenge in Vienna.

“My greatest race is breaking the two-hour barrier,” he opined. “Reason number one is that I made history and told people that anything you say and work on, you will achieve.”

Despite both his age and glittering resume, Kipchoge shows no signs of slowing down – quite the opposite, in fact.

“A lot is still in my bucket list but the main one is to run all six major marathons and win all of them – that’s my next challenge.”

Kipchoge has already won titles at three of the events that form part of the world marathon majors, with victories in London, Berlin and Chicago, meaning he still has to triumph in Boston, New York and Tokyo.

Coach Patrick Sang, who has overseen Kipchoge’s stunning transition from 5000m world champion to marathon record-breaker, believes his charge, with whom he has worked for two decades, can achieve this.

“Of course there will be a time when he retires, but for now he still has what it takes to perform at a very high level,” insists Sang, who won Olympic steeplechase silver in 1992.

“We’re going to see more of him in the coming years.”

An eye on conservation

While Kipchoge’s sporting legacy may already have been secured, no matter what he does in the future, there is another area where he wants to create a lasting impression.

“I would like to leave a legacy whereby people will remember me when they see my face,” he said. “My name is about the themes of fitness, conservation and education.”

In September, he established the Eliud Kipchoge Foundation to focus on those very three things – ‘which are really important to me’.

“There is research that says you should not train where there is polluted air or dirty air, and only train where we have clean air,” he explained.

“We are trying to tell people to get out of the door and run for fitness and health. My foundation is building libraries and at the back of our minds, you need libraries in every local kindergarten, primary and secondary school.”

As well as his conservation work, he wants more people to take up his sport.

“Running means life to me – without running, there’s no life,” he said. “A running career has got me places; running has put food on the table for my children and my siblings.”

“Running has actually enabled me to inspire more people and tell people that no human is limited.”

His own drive, he says, comes from not just his own love of sport but also the desire ‘to totally inspire more people, kids and youth every day’.

So when the running man finally hangs up his spikes, do not expect him to rest on his laurels – but to start a new marathon, this time to preach the message of building a better planet in the future.

“If I didn’t have a lot of work to do, I would like to go around the world to inspire youth, to inspire kids to love running,” he said.

“I would go on tour to do more regarding conservation and talk of sport and of education. I will tackle the match.”

If he does it as well as he runs 26.2 miles, the world might just become a better place.