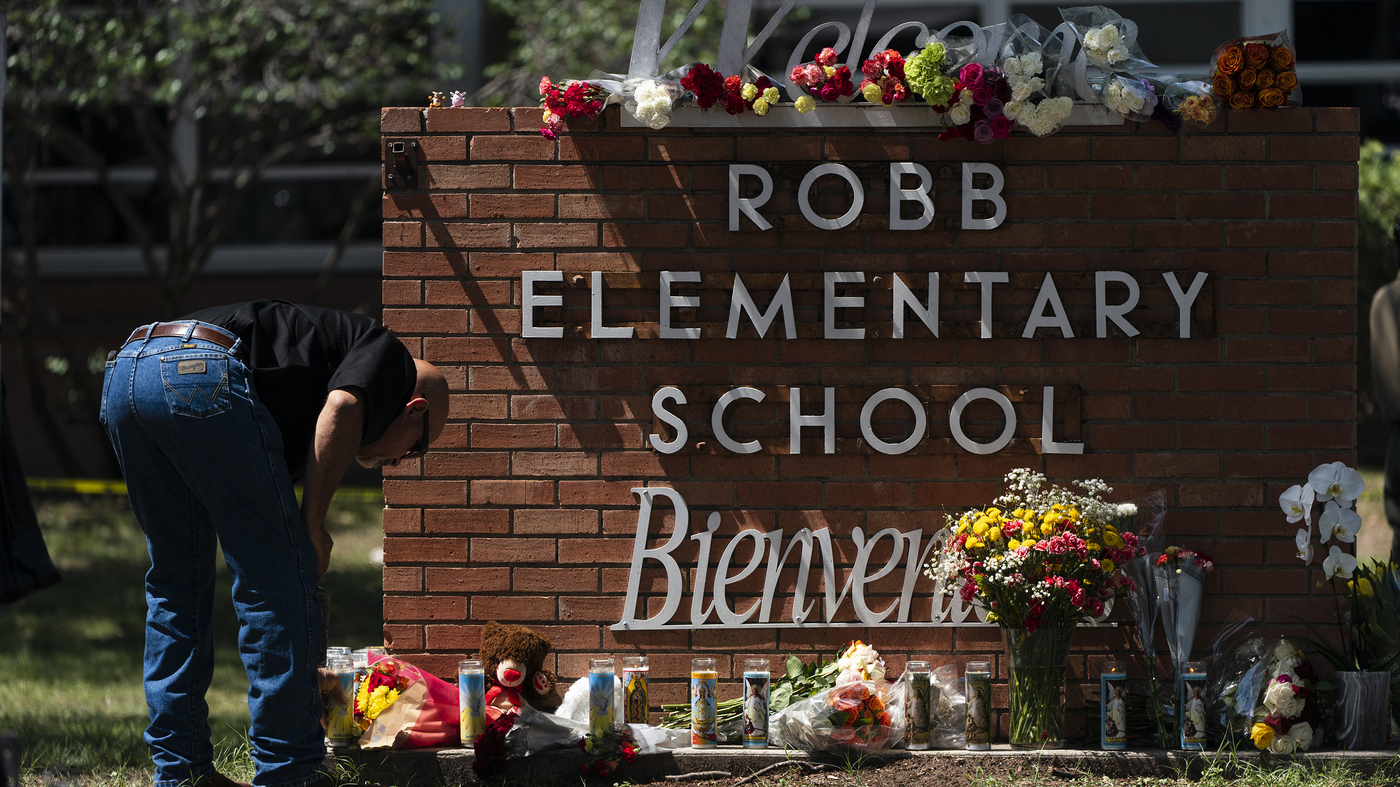 A law enforcement personnel lights a candle outside Robb Elementary School in Uvalde, Texas, Wednesday, May 25, 2022. Desperation turned to heart-wrenching sorrow for families of grade schoolers killed after an 18-year-old gunman barricaded himself in their Texas classroom and began shooting, killing several fourth-graders and their teachers.

A law enforcement personnel lights a candle outside Robb Elementary School in Uvalde, Texas, Wednesday, May 25, 2022. Desperation turned to heart-wrenching sorrow for families of grade schoolers killed after an 18-year-old gunman barricaded himself in their Texas classroom and began shooting, killing several fourth-graders and their teachers.

Just days before the academic year was supposed to end and summer break was to start, teachers and students at Robb Elementary were attacked in their own school. They died in their classroom, unable to escape the gunman.

Two teachers and 19 students were killed at the elementary school in Uvalde, Texas, making it the second-deadliest school shooting in U.S. history. At least four others were injured.

Here’s what we know about the victims who died:

Esmeralda Bravo, held a photo of Nevaeh at a Wednesday night vigil, NBC reports. An aunt, Yvonne White, posted a verified fundraiser for the family.

“My baby girl has been taken away from my family and I,” her father, Jacinto Cazares, wrote on Facebook.

Describing his daughter as being full of life and love, he added, “It hurts us to our souls.”

Brandon Elrod spent hours looking for his daughter after the shooting, and when he wasn’t able to locate her in the rendezvous point or local hospitals, he wanted to get in touch with the nearest funeral home.

“I don’t know what this world’s coming to,” Elrod said in a brief interview with ABC News.

“He was always full of energy,” his father, Jose Flores Sr., told CNN. “Ready to play till the night.”

The fourth-grader, who loved baseball and video games, had two siblings.

After their search for Ellie ended with news that she had died, her parents, Jennifer Lugo and Steven Garcia, aired their grief on Facebook. Lugo said her heart is shattered.

“I love you baby girl,” she wrote late Tuesday night. “I will never stop thinking of you !!!”

“Our Ellie was a doll and was the happiest ever,” Garcia wrote. “I was gonna DJ for her at her party like she wanted me too!!! Mom and Dad love you never forget that and please try to stay by our side Amor!!!!”

Garcia taught at Robb Elementary for more than 20 years, spending her entire career at the school.

“I love to BBQ with my husband, listen to music, and take country cruises to Concan,” she said, referring to the popular summer getaway area that’s about 20 miles north of Uvalde, along the Frio River.

For the past five years, Garcia had been a co-teacher at Robb, working alongside Eva Mireles, the other teacher who died in the shooting.

She had four children – two daughters and two sons – according to her bio on the school website. Garcia and her husband, Joe, were married for 24 years, she said on the site. A family member says that Joe had a fatal heart attack on Thursday, two days after his wife’s death, the Associated Press reports.

Manny Renfro told the Associated Press that his grandson was “the sweetest little boy that I’ve ever known.”

He last came to visit during spring break.

“We started throwing the football together and I was teaching him pass patterns. Such a fast little boy and he could catch a ball so good,” Renfro said.

“There were certain plays that I would call that he would remember and he would do it exactly like we practiced.”

“You did not deserve this my sweet baby girl,” her mother, Kimberly Garcia, wrote on Facebook. “Mommy loves you, mommy can’t sleep without you.”

Her father, Angel Garza, wrote, “My little love is now flying high with the angels above. Please don’t take a second for granted. Hug your family. Tell them you love them. I love you Amerie jo.”

Berlinda Irene Arreola told The Daily Beast that her granddaughter — who leaves behind a 3-year-old brother — was fatally wounded while trying to call 911.

“So the gunman went in and he told the children ‘You’re going to die.’ And she had her phone and she called 911,” she said. “And instead of grabbing it and breaking it or taking it from her, he shot her. She was sitting right next to her best friend. Her best friend was covered in her blood.”

His cousin, Jailah Silguero, was also killed in the shooting.

“They were just so sweet,” Gonzales added. “They were sweet kids and lovable. What can you say about little innocent kids?”

Lopez’s mother, Felicha Martinez, confirmed to The Washington Post that her son was among those killed in Tuesday’s attack. (The family has also created a verified GoFundMe for funeral expenses).

She said he loved dancing and sports, and that his favorite school subject was art. He was a bright light for their family with a smile that could cheer anyone up, she added.

Lopez received a certificate at his school’s honor roll ceremony just hours before the shooting. Martinez said she told him she loved him and hugged him goodbye, not imagining that would be the last time she saw him.

“He really couldn’t wait to go to middle school,” she said.

His cousin, Lisa Garza, asked for prayers on Facebook. “My little cousin lost his life today to this senseless act of a shooter at his school,” she said.

Mireles was remembered in a Facebook post by her daughter, Adalynn Ruiz, as “the half that makes me whole.”

“My best friend, my twin was taken from me,” Ruiz said. “Thank you for loving me in the best ways and for raising me to become so strong. Everyone who knows you knows how outgoing and funny you were and I will miss your laugh forever.”

In a bio on Robb Elementary’s website, Mireles said she had a “supportive, fun, and loving family” that included three “furry friends.” She said she enjoyed running and hiking “and now you just might see me riding a bike!!”

Mireles co-taught with Irma Garcia, who also died in the shooting.

Ramirez “loved to draw and wanted to be an artist, and even submitted a drawing to Doodle for Google,” her father told KSAT reporter Garrett Brnger.

Rodriguez “was killed along with her cousin Jackie Cazares,” local TV news KSAT reports, adding that the two were classmates in their fourth-grade class.

“We are deeply saddened by the [loss] of this sweet smart little girl,” said Felix Coronado, whose cousin Ana was Rodriguez’s mother. Coronado set up a GoFundMe page to pay for funeral expenses and time away from work for Rodriguez’s mother.

Rodriguez’s cousin, Destiny Esquivel, said in a Facebook post said she wished she had told Rodriguez she loved here one more time, calling Rodriguez “my mini me and my little best friend.”

“My beautiful, smart, Alexandria Aniyah Rubio was recognized today for All-A honor roll. She also received the good citizen award. We told her we loved her and would pick her up after school. We had no idea this was goodbye.”

Her father, Vincent Salazar, told the Associated Press that Layla loved to swim and dance to Tik Tok videos and that he had won six races at her school’s field day.

He said that as he drove her to school each day, the father and daughter would sing along to “Sweet Child O’ Mine” by Guns ‘n’ Roses.

“She was just a whole lot of fun,” Salazar said.

She was the cousin of another victim, Jayce Carmelo Luevanos.

Cruz Torres was a “beautiful young girl with a lot of energy,” her grandfather told ABC’s Mireya Villarreal.

“Roger was a very intelligent, hard-working and helpful person. He will be missed and never forgotten,” said Precious Perez, Rojelio’s aunt.

At least 17 people were wounded in the attack

In addition to those who died, 17 people were also injured in the shooting, Gov. Greg Abbott said in a press conference Wednesday.

“All pediatric patients have their families with them,” the hospital added.