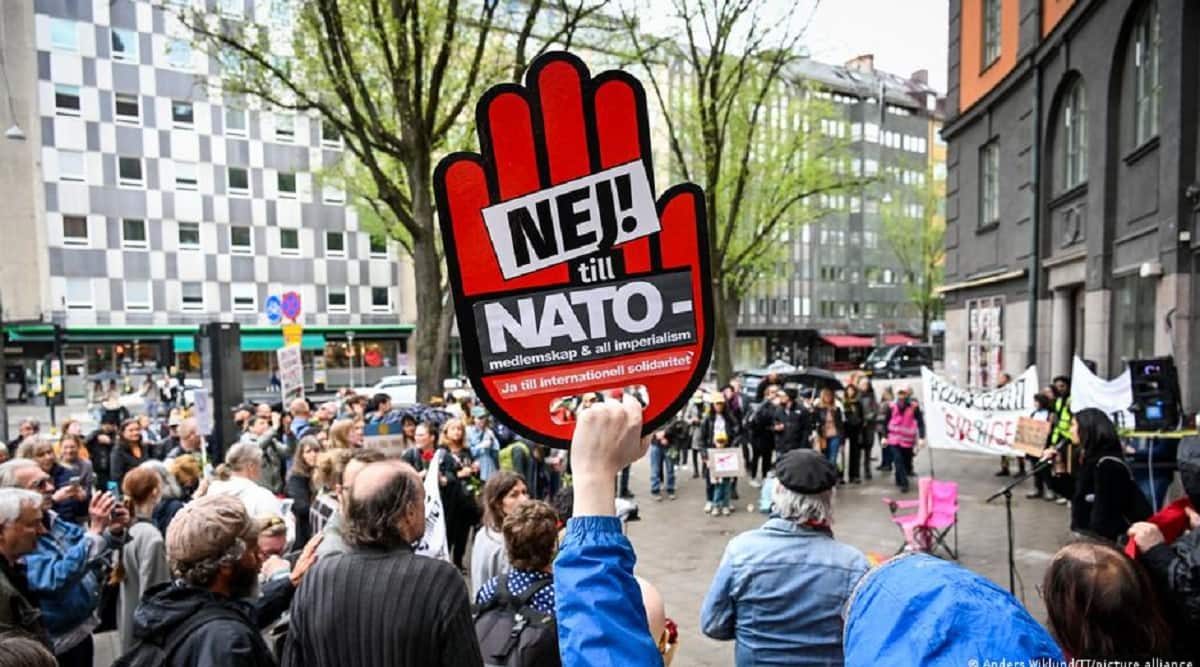 “The best thing for the security of Sweden and the Swedish people is to join NATO,” said Sweden’s Prime Minister Magdalena Andersson, as she formally confirmed Stockholm’s intention to join the world’s largest military alliance earlier this week.

Her announcement heralds the end of Sweden’s 200 years of military neutrality — a security policy the Nordic country has embraced since the 19th century.

While a majority of Swedes have voiced support for their country to join NATO amid the war in Ukraine, there are however many young people who are more hesitant.

Some even took to the streets of the Swedish capital this past weekend, condemning the loss of military neutrality as a step which would beget more violence in the world.

“Joining NATO will spill more blood because NATO is a war organization and not one working for peace,” Ava Rudberg, 22, the president of the Young Left Party in Sweden who was a part of the protest, told DW. “It is a military alliance which creates more war and we’re keen to maintain peace in Sweden.”

Linda Akerström of Svenska Freds- och Skiljedomsföreningen, the Swedish Peace and Arbitration Society, told DW that many people were angry because neutrality in military conflicts is extensively linked to Swedish identity.

“For a lot of people, this decision is a big change because for all these years, many Swedes have seen themselves as voices which harbor peace around the world. But right now, I believe many feel the decision to join NATO has been a hasty one based on fear,” she said.

“Basically, making such a big decision in a very tense situation and to a large extent based on fear is like going to the grocery store when you’re hungry, and we all know that is not a situation where you make good choices. There has not been enough of a debate with both sides represented for such a big decision to be legitimate,” she added.

Pros and cons of losing neutrality

According to NATO, Sweden formally declared neutrality in military conflicts under the reign of King Karl XIV Johan in 1834. While the country allowed German forces to transit through its territory during World War II, it continued to maintain its neutral stance.

While Sweden has played a role in Afghanistan by deploying troops to the country as a part of the NATO-led Resolute Support Mission until the end of May 2021, Alina Engström, an analyst in security policy at the Swedish Defense Research Agency told DW that already since the 1990s, Sweden has been increasing its interoperability with NATO.

That means the country already adheres to NATO standards. The announcement to now join the alliance was “a small step on the military and operational level,” Engström told DW.

She added that “the pros of abandoning the military non-alignment status means Sweden may now be part of NATO’s defense planning and enjoy security guarantees. But the cons of alliance membership lies in Sweden having to be more agile to adjust our security policy and losing some room for maneuver in foreign and security policy.”

‘Struggling with the image of ourselves’

Yet Lisa Nabo, 27, the president of the youth league of Sweden’s ruling Social Democratic Party, said despite previous cooperation with NATO, officially losing neutrality is an issue that many young Swedes are struggling with.

“My generation, we are in our 20s now. We have no memory of a war in Europe. So this situation that we are in now is very unfamiliar to us and we don’t have the same history with war as many of our neighboring countries who were part of World War II or the war in Yugoslavia,” she told DW.

“As young Social Democrats we are struggling a bit with the image of ourselves right now, because a lot of us started our political career with the idea that we were a peaceful organization who are fighting to stop militarization. It’s hard to combine that with membership in NATO. But of course, we respect the decision of our party which was democratic and unanimous andour focus now is to make sure that we can still be an important voice for peace in the world,” she added.

And it’s not like all young Swedes are against joining NATO. There are many who think that in light of what’s happening in Ukraine, it’s the right decision at the right time.

“I’m happy about the government’s announcement,” Martin Aberg, a young Swede in Stockholm, told DW. “With Finland joining, it would be weird if we were the only Nordic country that isn’t in NATO. Then Russia might see invading Sweden’s largest island Gotland as a nice choice. Just look at Ukraine not being in NATO.”

“Joining in the current security situation is the right decision. We could have already joined in 2014 when Russia annexed Crimea,” she told DW.

Meanwhile, away from the bustling cities of Sweden, Sara Andersson Ajnnak, a young artist who belongs to the Indigenous Sami community in the country’s north, thinks Sweden’s decision to join NATO could impact their rights.

“I feel it is problematic for Sweden to join NATO, especially for me as an Indigenous person in the north. I feel like there is already a fight over land in the country and I believe that NATO can see the north of Sweden, which is Indigenous territory, as a huge military region to carry out their drills. So I just see this as another form of colonization,” she told DW.

“Even today we are affected by the air force activity which impacts the reindeer population. Such activities are now bound to increase and I’m scared how this decision will affect our rights and the environment.”

But the country’s prime minister has emphasized that while joining the military alliance would secure Sweden amid Europe’s current security environment, Sweden would refuse nuclear weapons and permanent NATO bases on its soil.

Even if the decision to join NATO and give up neutrality has now been finalized, Ida Jansson, 30, a policy officer from Sweden currently based in Brussels, told DW that many of her peers in Sweden are keen to have more discussions at a national level, to understand what NATO does and what this means for Sweden’s new military identity.

“Personally, out of practicality, I understand why we need to join NATO under current circumstances. But history has taught us that collective security rarely stops conflicts. This is part of a longer discussion we would have needed at national level before joining, as well as understanding the obligations and benefits of NATO membership,” she told DW.

“But given that it is an election year in Sweden, it has been politically impossible to allow room for rational political debate. I fear that without these discussions, it will be very difficult for Swedes to accept our new military identity,” she added.