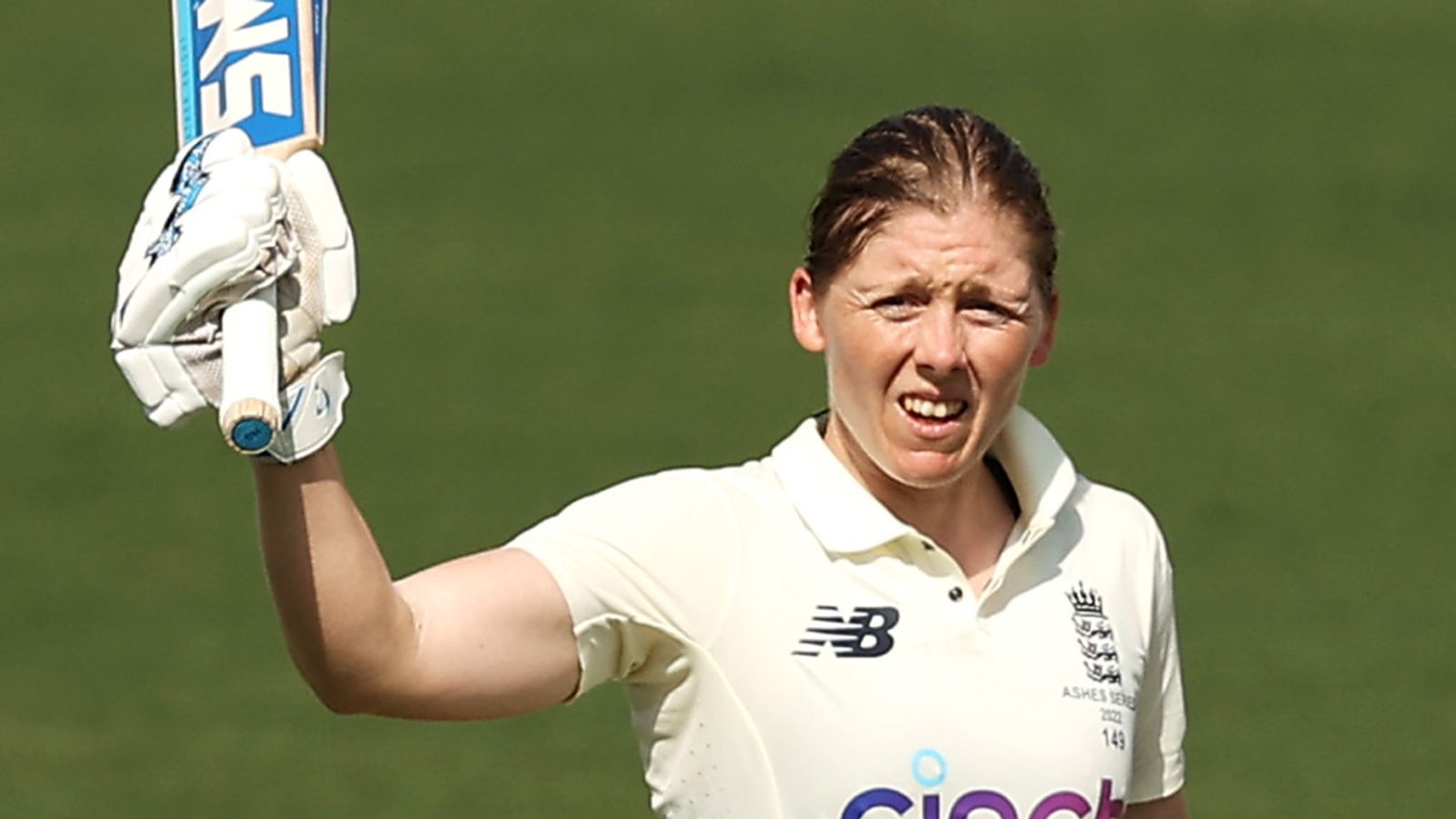 England close on 235-8, trailing Australia by 102 runs at the end of day two in Women’s Ashes Test; Heather Knight hits an unbeaten 127 to hold the innings together and shares unbroken 66-run stand with Sophie Ecclestone (27no) late in the day; Katherine Brunt earlier completed five-for

Heather Knight scored a superb unbeaten century to hold Australia at bay on day two of the Women’s Ashes Test and keep England in with a chance in Canberra.

The tourists found themselves in trouble early in their innings with both openers gone cheaply and by tea, they had slumped to 120-6.

Captain Knight (127no) came in at No 3 and remained a picture of calm as wickets fell at the other end as she moved, one scare in the nineties aside, serenely to a 213-ball century in the evening session.

It is Knight’s second Test hundred, both against Australia, in nine matches and having reached three figures, she ensured the follow-on was avoided with an unbroken 66-run partnership with Sophie Ecclestone (27no) for the ninth wicket as England closed on 235-8, still trailing by 102.

Australia had declared on 337-9 earlier in the day, adding just 10 to their overnight total, with seamer Katherine Brunt (5-60) taking two wickets to complete her third Test five-wicket haul.

England began the day needing quick wickets at the Manuka Oval and Brunt delivered, bowling Annabel Sutherland (8) with a beauty that nipped away to hit the top of off in the fourth over of the morning and when she had Jess Jonassen (2) caught behind a couple of overs later, giving Amy Jones a sixth catch of the innings, Meg Lanning had seen enough.

With a sizeable total already on the board, the Australia skipper was keen to get bowling, knowing that victory in the standalone Test will ensure her side retain the Ashes.

The home side got the early breakthrough they were after when 18-year-old Darcie Brown (1-39), playing in her second Test, drew Lauren Winfield-Hill into the drive and found the edge to second slip to claim her first wicket; 13 balls into the innings and the England captain was at the crease.

Knight and Tammy Beaumont batted patiently, trying to see off the new ball but in the 12th over, Ellyse Perry, so often the scourge of England in the recent Ashes series, trapped Beaumont on the crease with a ball that seamed back in to the right-hander. The umpire’s finger went up and the review proved in vain.

It began a pattern that saw partnerships just beginning to show promise for England before they were promptly broken by Australia, with Nat Sciver (15) and Amy Jones (13) falling to Sutherland (2-52) – the seamers first two wickets in Tests – either side of Sophia Dunkley (15) chopping on to Perry (2-35).

Knight, meanwhile, had made it through to her half-century but when the impressive Alana King (1-43) trapped Brunt (1) lbw with the last ball before tea, claiming her maiden Test wicket on debut, England were still well short of the follow-on target and the skipper was running out of partners.

King’s leg-spin remained a threat in a mammoth 19-over spell either side of tea but it was the other spinners who reaped the benefits with Charlie Dean (9) and Anya Shrubsole (3) dismissed by Ashleigh Gardner (1-27) and Jonassen (1-8), respectively.

Two plots were running simultaneously by this point with Knight closing in on her century and England edging towards avoiding the follow-on but both were in jeopardy when, in the over before drinks, the right-hander skipped down the pitch and tried to hit Jonassen back down the ground.

The shot was on but, perhaps wary of both personal and team milestones, Knight did not fully commit to the shot and only just got enough elevation to ensure Jonassen was able only to tip the ball over the bar as she stretched to take the catch.

With that scare over, Knight was soon back into her groove and brought up a crucial hundred with a drive off King before chipping the ball over mid-on a few overs later as the follow-on was averted.

Australia took the second new ball with half an hour left in the day but Knight remained as resolute as ever, even taking advantage of the harder ball to add to her boundary count, while Ecclestone had defended stoutly and was growing in confidence.

The fifty partnership came up and a boundary apiece in the last over of the day helped England’s cause a little more. Knight walked off unbeaten having almost single-handedly kept her side in contention but with the visitors still behind in a match that, realistically, they have to win if they are to regain the Ashes, there is still a lot of work to be done going into day three.

The West Indies vs England T20 series comes to a conclusion in Bridgetown, Barbados this weekend with the fourth game on Saturday (8pm UK time) and the fifth on Sunday (8pm UK time).

The Women’s Ashes, meanwhile, continues with the standalone Test match in Canberra (Thursday-Sunday). Australia led the multi-format series 4-2 after the three T20 internationals, with the hosts winning the first game by nine wickets before the second and third matches were washed out by rain.

Sticking in Australia, and the Big Bash League final is live on Sky Sports Cricket from 7.30am on Friday as Sydney Sixers look for a third successive title when they face Perth Scorchers at Marvel Stadium in Melbourne.