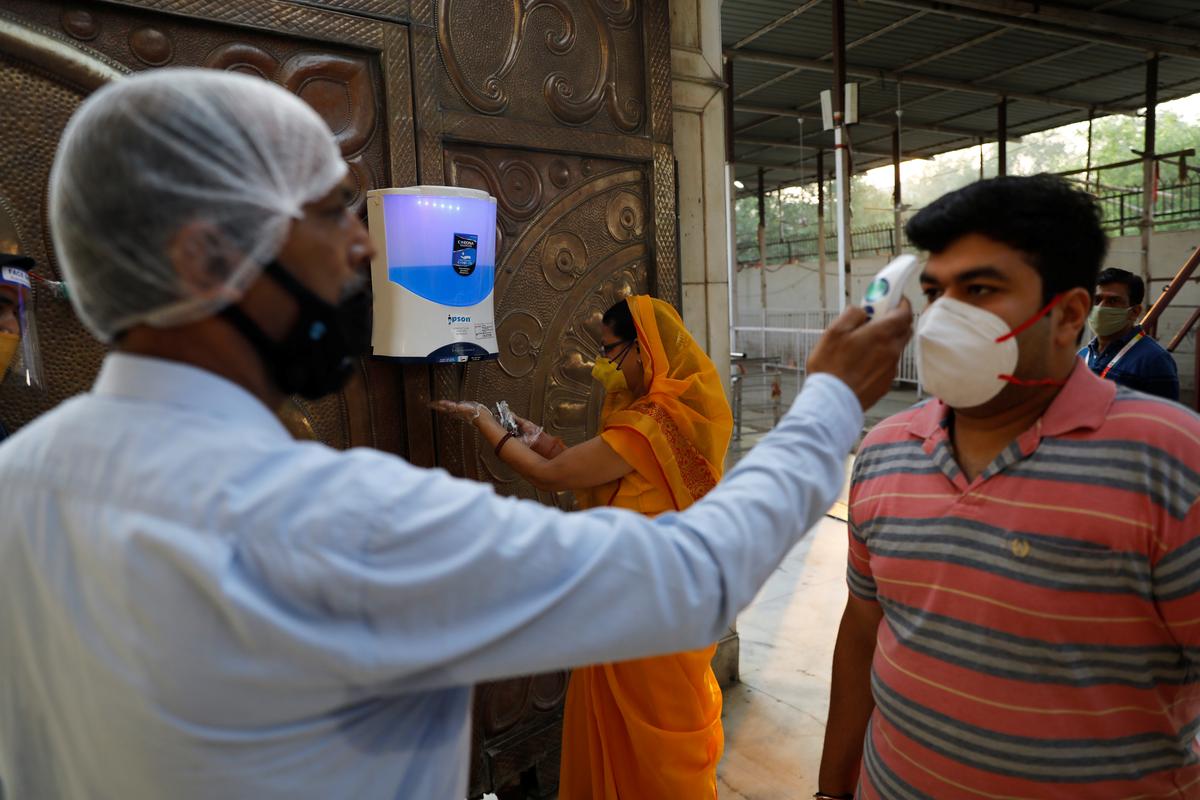 NEW DELHI (Reuters) – People trickled into temples and mosques in India on Monday as the federal government lifted most restrictions on public places, even as the country added a record number of infections in a single day.

A woman sanitizes her hands as a man gets his temperature checked inside a temple after the opening of the most of the religious places after India eases lockdown restrictions that were imposed to slow the spread of the coronavirus disease (COVID-19), in New Delhi, India, June 8, 2020. REUTERS/Anushree Fadnavis

After imposing a severe lockdown in March, Prime Minister Narendra Modi’s government is under pressure to fully open up the economy and get people back to work to prevent mass distress.

It ordered shopping malls, places of worship and restaurants to open under a set of guidelines meant to prevent a further surge of infections in the world’s second-most-populous country.

Worshippers wore masks, stood 6 feet (2 metres) part and went through thermal scanners at Hindu temples in Delhi and elsewhere in the country that are usually filled to capacity.

Harsh Vyas of an ISKCON (International Society for Krishna Consciousness) temple in the western city of Ahmedabad said access was strictly controlled.

“We are allowing only a small number of devotees inside the temple at one time. We have drawn circles where they need to stand to ensure proper distancing of at least 6 feet,” Vyas said.

Disinfection tunnels were installed at the entrance to Delhi’s shopping malls, due to open later Monday.

But the capital, one of the country’s hotspots, will not allow hotels to reopen because it said it might need to convert them into temporary hospitals if there were a big jump in cases.

“Our cases are rising each day; we could run out of beds,” said Delhi Chief Minister Arvind Kejriwal.

Only the United States, Brazil, Russia and the United Kingdom have more cases, and health experts say India’s peak could still be weeks away, if not months.

Deaths from COVID-19 stood at 7,135, still low compared with other countries that have suffered tens of thousands of fatalities.

In Mumbai a few offices opened, and in the suburbs there were long queues at bus stops as the commuter trains that are its lifeline have not yet opened.

“The slower we are to restart, the more we lose against countries out of lockdown. We can’t lose any more time,” he said.