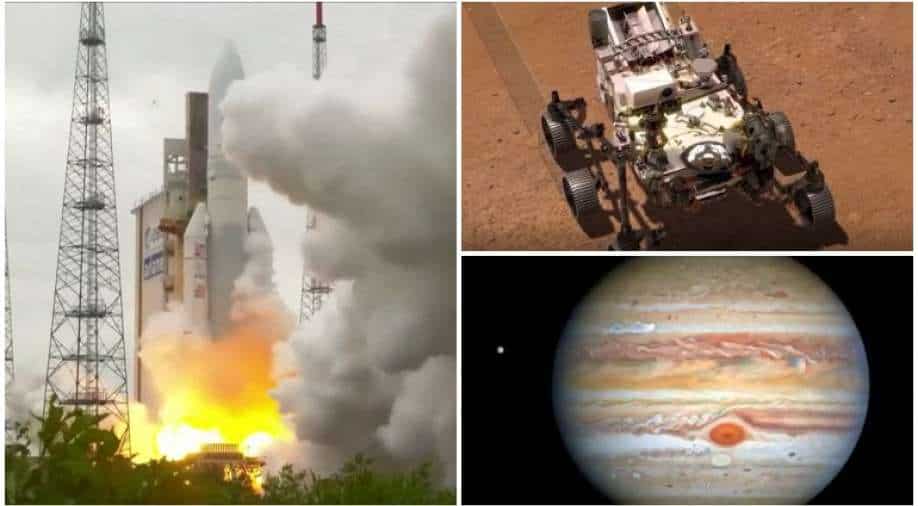 The year 2021, or Year Two of the pandemic as some of us would like to call it, was replete with space-related events that not only had scientific importance but which resonated with public as well. Some of these were once-in-decades developments while others marked advancement of human vision. NASA was at the forefront, as were other space agencies around the world. But what was different this year was even private players made successful forays into space missions. 2021 marked first-ever powered flight on the surface of any planet other than Earth.

Using the new space telescope, we will be able to observe galaxies which were formed when the universe was in its infancy.

Perseverance on Ingenuity on Mars

NASA’s Perseverance rover touched down on Mars on March 5, 2021. The rover continues to study conditions on Mars and is sending invaluable scientific data back to Earth.

Ingenuity, the helicopter which is aiding Perseverance study Mars created history on April 19, 2021 by marking first-ever powered flight of a man-made craft on an alien planet. Martian atmosphere is very thin as compared to Earth. Hence, flying a helicopter on Mars is an extremely difficult task. Ingenuity’s flight was initially supposed to be just an achievement. But the success prompted NASA to extend its mission. Ingenuity carried out several flights after it firt took off from Martian surface.

An American millionaire became the world’s first space tourist in 2001, but it took 20 more years for the promise of private space flight to finally materialize.

In July, Virgin Galactic founder Richard Branson faced off against Blue Origin’s Jeff Bezos to be the first non-professional astronaut to complete a suborbital spaceflight.

While the British tycoon won that battle by a few days, it was Blue Origin that raced ahead, launching three more flights with paying customers and celebrity guests.

Elon Musk’s SpaceX entered the fray in September with a three-day orbital mission around the Earth featuring an all-civilian crew on Inspiration 4.

But it was William Shatner, who played the swashbuckling Captain Kirk on the 1960s TV series “Star Trek,” who stole the show with a moving account of his experience.

“What you’re looking down on is Mother Earth, and it needs protecting,” he told reporters.

A spacecraft ‘touches’ the Sun

It may be impossible for any human-made spacecraft to descend on the actual surface of the Sun, but this year marked a step in that direction. NASA’s Parker solar probe ‘touched’ the Sun. This is to say that it entered ‘Corona’, the Sun’s atmosphere. This is a great achievement. The probe entered the Corona in April 2021.

A Russian crew shot the first feature film in space aboard the International Space Station (ISS) in 2021, and Japanese tourists made their own visit there on a Russian rocket.

For a few minutes on December 11, there were a record 19 humans in space when Blue Origin carried out its third crewed mission, the Japanese team were on the ISS along with its normal crew, and Chinese taikonauts were in position on their station.

Jupiter has 79 moons and scientists think there are many more that remain to be found. This year an amateur astronomer found one of those. Kai Ly, the astronomer, made the discovery by analysing data sets from 2003.

The moon has been named EJc0061. It belongs to the Carme group of Jovian moons.