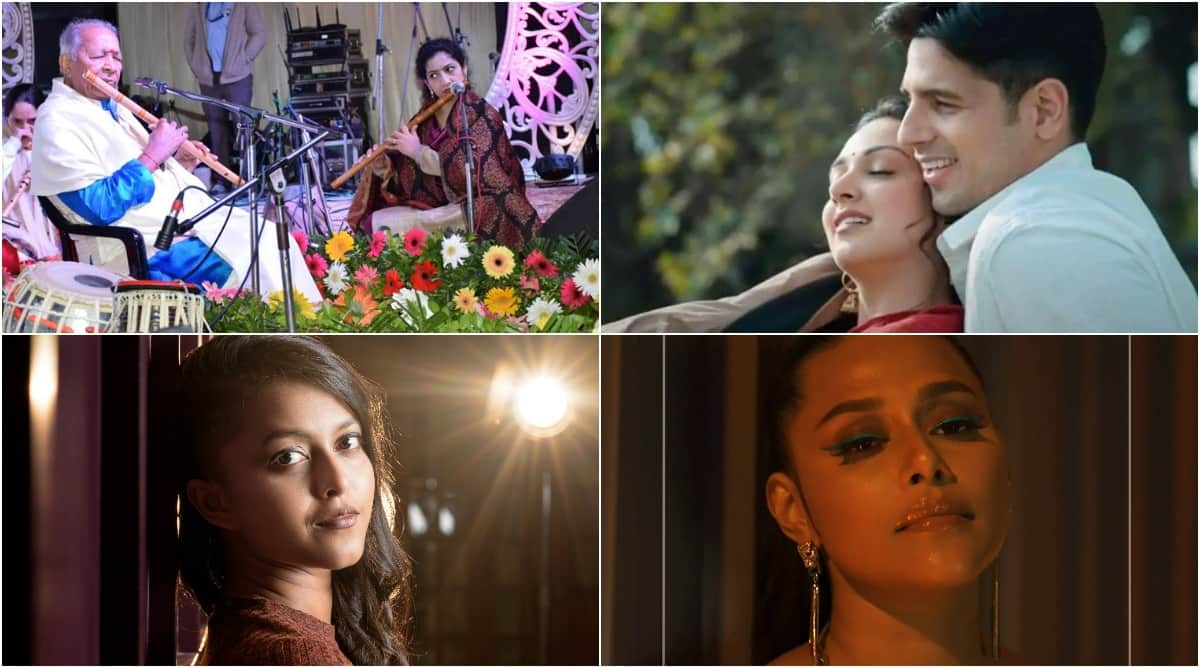 The spirit was severely bruised in the tumultuous 2021 with the second wave leaving us in a state of struggle. After a damaging year, when live concerts were completely absent, the music slowly and steadily returned to the proscenium. And of course, there were those who found music in the dark times too, in the studios, in their bedrooms and made us smile. From a heartwarming concert in Kashmir’s Chashm-e-Shahi, young artistes donning the mantle for the year to give us music that had us hear it despite a numb state of mind to the Grammys learning about racial diversity and billion-dollar music acquisitions, the year was bustling with activity. Here are the artistes and stories from the world of music from 2021.

Notes from the Valley

It isn’t often that a classical music concert makes it to Kashmir. With Zabarwan mountains as the backdrop, Chashm-e-Shahi, the paradisiacal Mughal garden came alive with raag Yaman, a raga the creation of which is attributed to Amir Khusrau. Eighty-year-old flute maestro Pt Hariprasad Chaurasia took the fundamental raga and played with it for about 40 minutes, his Parkison’s causing him to work harder than usual. The tune was lost sometimes, but the spirit wasn’t. He was ably supported by tabla player Pt Ram Kumar Mishra and his students Devapriya, Amrita Uprety and Vaishnavi Joshi. Organised by SPIC MACAY as part of Azaadi ka Amrit Mahotsav, the concert titled Wadi-e-Kashmir was an extension of the organisation’s famed ‘Music in the Park’ series.

There were quite a few names that caught our attention including Pavithra Chari, one half of Delhi-based duo Shadow and Light, Mumbai based singer-songwriter Saachi Rajadhyaksha, and Bangluru-based L’Nee Golay, who was a gentle reminder of an Amy Winehouse-esque vibe, the pack was led by Vasundhara Vee, who turned our heads with her powerful and lush voice in the absolutely uplifting single, her debut solo, Run – the piece that comprises “notes to self”. The only name in India at this point that commands respect as the finest jazz vocalist who can deliver soul like no one else, this time Vasundhara sounds different. There’s a departure from her associated acts such as Adil and Vasundhara and more recently Merkaba. Now she is a solo artiste baring her core to us. The whiskey-tinged voice and the honest lyrics are hard to miss. Produced by Dhruv Ghanekar, the song and the video upped the game by miles in 202q. Other artistes will have to work really hard to get where Vasundhara is at this point – self aware, in love with herself, complex, hungry and with new ideas and music in tow. Watch out for this one. She will be a trailblazer in 2022.

Abhishek Raghuram: Among the young vocalists – Hindustani and Carnatic – Abhishek Raghuram, 36, is one of the finest vocalists at this point. He was in full form at December Music Season in Chennai, especially with performances of raag Bihag and Hamsanandi, which presented his extraordinary vision of music and musicality. Sometimes, during his performance, a taan, a particular phrase, may seem out of grasp even to some of the more senior musicians but the tenderness with which Raghuram attempts these is worth attending every concert by him. Guru P S Narayanaswamy’s student, he is the grandson of iconic mridangam player Palghat Raghu and related to the famed Lalgudi family on his mother’s side. He is also related to ghazal singer Hariharan. A unique performer, he had a special year and is likely to give us some more wondrous music in the coming year.

Pratibha Singh Baghel: Reality show contestant Pratibha Singh Baghel caught much attention as Umrao Jaan in the musical Umrao Jaan Ada that was staged in the Capital in 2019– 38 years after Muzaffar Ali’s Umrao Jaan was screened. Her Instagram posts got a lot of attention, so did the online shows she did on her YouTube channel during the lockdown. But what catapulted her to fame was Bole Naina (Sufiscore) a ghazal album penned by Gulzar and composed by Deepak Pandit, the violinist who played along with Jagjit Singh for years. The album also had Ut Zakir Hussain heading the percussion team. What’s interesting about Baghel’s voice is how her voice has a unique transformative quality and moves easily within ghazal, a sufiana qalam, and a contemporary film song among others. Then there is strong improvisation capability. Baghel is an artiste to look out for in 2022, with a plethora of songs and projects in the pipeline.

Ishaan Leonard Rao: A classical artiste that caught attention this year is pianist Ishaan Leonard Rao, 17, who until some years ago could be seen in the audience while his parents – sitar player Shubhendra Rao and cellist Saskia Rao performed together. But the Rao family came together for a concert this year where Ishaan did a deep dive into the world of Mozart and worked along the Indian classical scales to showcase his stormy reworkings of some of the pieces. The fact that three artistes understood the rulebook of both forms was what added to the cohesiveness of the concert. Ishaan also launched ‘The Piano Project’ in which he created lesson videos, a lesson book and a website for those who do not have access to piano education otherwise. He began his lessons with children from Takshila Education Society’s Parivartan, Bihar. He also went on to perform at the National Gallery of Modern Art this year.

After balming the hearts of the quarantined Sri Lankans, 28-year-old Yohani D’Silva’s “Manika maake” hithe reached India, garnering more than 110 million views in no time. The Sinhala song broke the internet, with celebrities to common folk, everyone grooving to its uncomplicated melody on loop. From Hindi-film actors Madhuri Dixit, Parineeti Chopra and Tiger Shroff, everyone was singing and dancing to the piece and putting out videos on their social media. The popularity spawned covers from all over the world, both instrumental as well in many languages — in Tamil, English, Telugu, Konkani, Hindi, Bengali, and Tripura’s Kokborok, among others. It spurred a number of TikTok videos, Instagram posts and memes. YouTube pushed de Silva to instant fame. In Colombo, the YouTube star sat in her home watching how it felt to go viral. It was the unintended single’s global moment. “This was a really random take on the song. It wasn’t planned. We never thought it could be liked by so many people,” says de Silva to The Indian Express in a video interview.

In May this year, the seven-member boy band BTS became the first K-pop group to top the Billboard 200. They also put their fans – the ARMY as they are called – especially a plethora of teenage girls all over the world into a hysterical rapture. Their song Butter went viral and the smooth synths in the dance pop number and those fabulous dance moves, reminded us of memories from past pop world. The song seems alright to begin with – a fun number that hit us during the lockdown. But then it sticks, grows on your heart until you are humming away.

Lesson for the Grammys

The year began with the Recording Academy coming under fire for lack of diversity in its nominations. Three of the five nominees in the best children’s album category refused to accept the nomination because of “all white” musicians including themselves. Apt since America questioned and continues to question racial equity. Musician Alistair Moock, and acts Dog on Fleas and the Okee Dokee Brothers didn’t want to be nominated at the Grammys. Conversations followed that led to policy changes by the Academy, resulting in a very different kind of nomination list in 2021 – five artistes of colour have been nominated. Under the new policy nominees in non-craft categories such as children’s music, will be chosen by their peers. A landmark change from the lack of transparency that has existed in the system. The ceremony is slated to take place in January 2022. What makes the category interesting is the nomination of Indian American singer Falguni Shah, who made it to the top five for her album A Colourful World.

The music acquisition arena was a hotbed for activity in 2021. After almost decades of much instability over issues of piracy and free access which reduced the demand for buying new music, the music industry saw billions of dollars being pumped into it. There were enormous deals wherein artistes sold their music and its copyrights. The trend had begun in 2020 when Universal Group acquired Bob Dylan’s entire musical catalogue for close to 400 million dollars. The catalogue, comprising over 600 songs from six decades, covered iconic pieces like ‘Blowin’ in the Wind’ and ‘Like a Rolling Stone’. Months after Dylan, singer-songwriter David Crosby’s music was finally acquired in March 2021 by American entertainment executives Olivier Chastan and Irving Azoff’s Iconic Artist Group right after the company bought a majority stake in the Beach Boys’ intellectual property, including recording, publishing and the brand name. Columbian pop star Shakira followed, selling her 145-song catalogue, including her Olympic anthem ‘Waka Waka’, and popular pieces like ‘Hips Don’t Lie’ and ‘Whenever, wherever’ to Hipgnosis Songs Fund, a UK-based publicly-traded investment firm that also went on to acquire music catalogues from the likes of Canadian singer-songwriter Neil Young, former Fleetwood Mac singer Lindsey Buckingham, English musician Steve Winwood and Grammy Award-winning producer Andrew Watt, among others. The company is valued at 2.21 billion dollars.

Streaming platforms and their increased revenue possibilities is one of the biggest reasons here. Streaming services such as Spotify and iTunes, among others, have created an atmosphere that encourages a lot of the firms, both big and small, to want to invest in music. They have understood that GenZ and the millennials are spending big on streaming platforms. The trend is likely to continue this year too.

Songs from Shershaah – Rataan lambiyaan and Raanjha topped the charts on most streaming platforms. But for us it was B Praak’s old composition “Metho tera man bhareya” that stood out as a musical beauty in the same film. A notable mention here is Arijit Singh’s debut album Pagglait. A one-hour-34-minute album is a thing of the past but Pagglait gave us the old-world nostalgia. It was very intelligently crafted album with folk merging into contemporary with much finesse. The best bit was the background score, which was absolutely charming. Another song that stood out from the year was “Bandar baant” in Amit Masurkar’s Sherni. Drawing from the age-old story – Two cats and the Monkey – Hussain Haidri’s satire is composed by Bandish Projekt. As fabulous as the poetry is, one wishes it was sung a tad clearly. Some words just get lost because it’s sung too fast.