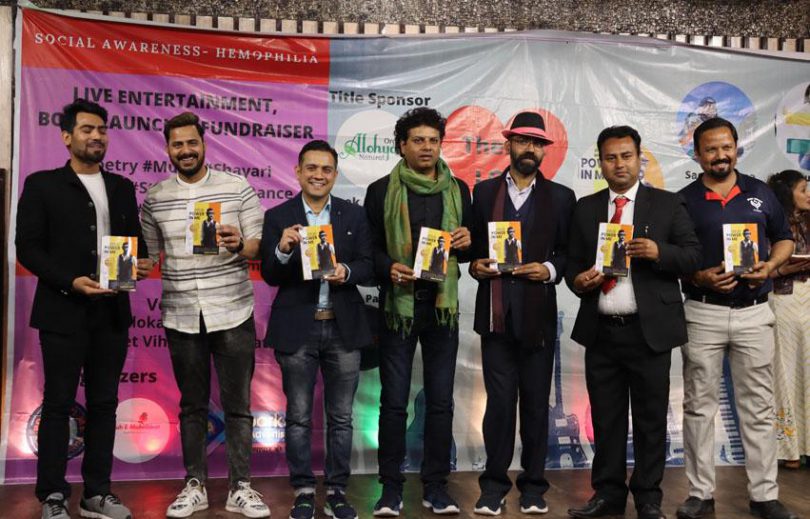 The Founder of Alohya Agrotech, Ms. Harshita Goyal and Chief Motivator for Alohya Agrotech Mrs. Kanchan Bansal, welcomed them. Also, they were the title sponsor for the event. Alohya Agrotech is an organic health and wellness company that manufactures various juices, cosmetics to different organic products.

The event comprised of many performances in categories of Poetry, Shayari, Music, Singing, Comedy and Storytelling. Three children from NGO- Amrit Varsha performed dancing and singing supporting this cause. Dr. Harish Rawat took his laughter yoga session, based on the theme of love. The event also had performances by performers with physical challenge and other hemophiliac to display their abilities.

In the second part of the event the Autobiography of Rex Karamveer Chakra Awardee Mr. Manoj Kumar Singh was launched in the presence of all the eminent guests and children of Amrit Varsha. Manoj Kumar Singh is also a patient of severe hemophilia. His autobiography is titled “Power In Me”. The book covers his life journey and his learning from childhood to chasing his dreams even with the complications of rare bleeding disorder. He is also the President of Power In Me Foundation and founder of Ruh-E-Mohabbat.
Hemophilia is a congenital bleeding disorder in which the patients lack the blood clotting factor 8 or factor 9. This causes bleeding for longer duration. Severe hemophiliacs suffer from spontaneous bleeding in their joints, muscles, tissues and sometimes in vital organs like brain and gastrointestinal region. Frequent bleeds into joint and muscles damage them, leading to permanent physical disability and pain similar to arthritis. Bleeding in vital organs can also cause death of the patient. The cost of the treatment is very high because the factor injection cost is high and dose varies as per the weight of the patient and severity of the bleed.
Anshu Taravath announced, support for providing training to the children of Amrit varsha in dance. RJ Manish Azad also announced his support to these underprivileged children and his upcoming national project for talented young writers.

Power In Me Foundation is a National Trust registered at Delhi/NCT. The main objectives of the Trust include Health, Education, Livelihood generation for the people with rare diseases and their family. It also focuses on Environmental issues. The Trust works on the motto that every individual has power only need to understand that. Ruh-E-Mohabbat is a special wing of Power In Me Foundation that promotes budding talents into poetry, shayari, music, singing, comedy, acting, dancing and storytelling. They have the tagline poetry for a cause. They are on a mission to bring positive social transformation by bringing positive changes into the lives of people with rare diseases and their families.

This event was an effort to raise some funds to set up special facility and scholarship programs for the people with rare diseases focus on their health, education and livelihood generation. For supporting the cause you can join in as volunteer to train the patients or their family member into livelihood, help organize future events, collaborate, donate or contact Mr. Manoj Kumar Singh, President- Power In Me Foundation at email: mpowerinme@gmail.com and mobile: +91-8851537816.