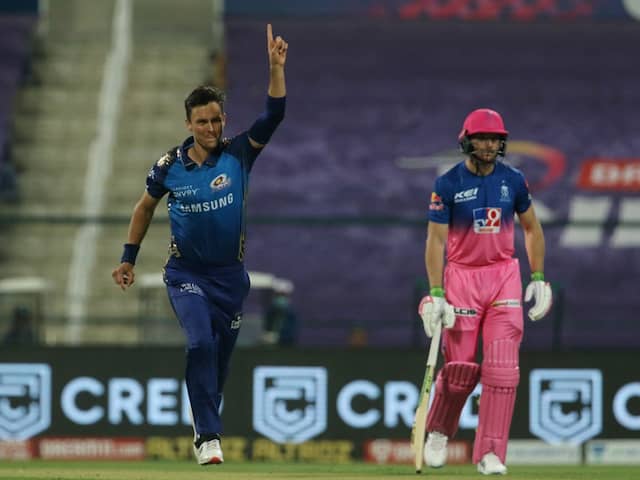 
Mumbai Indians romped Rajasthan Royals by 57 runs on Tuesday to go to the top of the Indian Premier League (IPL) 2020 points table, winning their third match in a row. Suryakumar Yadav hit an unbeaten 47-ball 79 as they set a 194-run target for the Royals, before their pacers took the game away from Steve Smith’s team within the powerplay at the Sheikh Zayed Stadium in Abu Dhabi. Jasprit Bumrah took four wickets and Trent Boult and James Pattinson took two apiece as RR were dismantled for 136. The big defeat sees the Royals slip to 7th in the table, after three defeats on the trot.

Delhi Capitals, however, will have a chance to reclaim the top spot, when they play their sixth game of the season against Rajasthan Royals on Friday.

Rohit Sharma, who scored 35 for Mumbai Indians, rose to fourth in the run-scorers’ table, with 211 runs this season. Suryakumar Yadav also shot up a few spots in the race for the Orange Cap with his fine knock, sitting at sixth, just a run behind Delhi Capitals captain Shreyas Iyer.

Yadav now has 180 runs this season.

The MI pacers are right up there in the race for the Purple Cap as well, with Jasprit Bumrah’s four-for taking him to 11 scalps for the season – just one behind DC’s Kagiso Rabada, who took a four-wicket haul himself on Monday.

Trent Boult’s two wickets means he now has 10 this year.

Rajasthan Royals will look to get back to winning ways in their next match against Delhi Capitals on Friday.

Mumbai Indians also have the Shreyas Iyer-led side next on their fixture list, as the two are slated to face each other on Sunday.