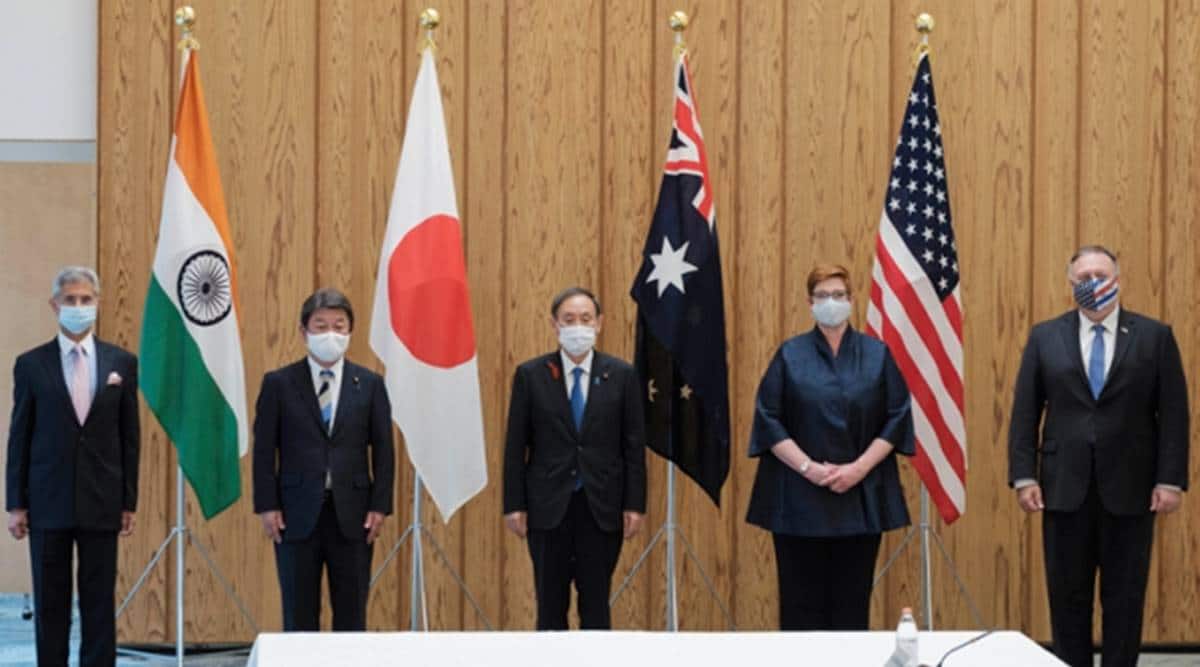 In a rare “in-person” meeting during the pandemic, the Foreign Ministers of the Quadrilateral grouping — US, India, Japan and Australia — met in Tokyo amid the five-month border standoff between India and China, with External Affairs Minister S Jaishankar seeking “respect for territorial integrity and sovereignty” and “peaceful resolution of disputes”.

US Secretary of State Michael R Pompeo was the only one to name China at the meeting. During his opening remarks, he said that “as partners in this Quad…it is more critical now than ever that we collaborate to protect our people and partners from the CCP’s (Communist Party of China) exploitation, corruption, and coercion”. for territorial integrity’

“We have seen it in the south, in the East China Sea, the Mekong, the Himalayas, the Taiwan Straits,” he said.

The Quad meeting signals a closing of ranks by the US, India, Japan and Australia against what they perceive is rising Chinese belligerence — and the value of a coordinated response. For India, the timing of the in-person meeting is an important marker of support amid the continuing border standoff with China in eastern Ladakh.

While this was the second such meeting — after New York in September last year — the fact that all four Ministers flew to Tokyo for the summit is significant amid rising tensions between China and the Quad countries.

“As vibrant and pluralistic democracies with shared values, our nations have collectively affirmed the importance of maintaining a free, open and inclusive Indo-Pacific. We remain committed to upholding the rules-based international order, underpinned by the rule of law, transparency, freedom of navigation in the international seas, respect for territorial integrity and sovereignty and peaceful resolution of disputes,” Jaishankar said at the meeting.

While the Ministry of External Affairs called it a “second Australia-India-Japan-United States Consultations on regional and global issues of common interest”, Jaishankar did not hesitate to describe it as a Quad meeting. “Delighted to join my QUAD colleagues at our Ministerial consultations in Tokyo,” he tweeted, although the government has been hesitant to use the term in official statements.

Highlighting the significance of the meeting, Jaishankar said: “The fact that we are meeting here today, in person, despite the global pandemic, is a testimony to the importance that these consultations have gained, particularly in recent times.”

With an eye on a more aggressive and assertive China, Jaishankar stressed on the need to have “coordinated responses”. “The events of this year have clearly demonstrated how imperative it is for like-minded countries to coordinate responses to the various challenges that the pandemic has brought to the fore,” he said.

“It is a matter of satisfaction that the Indo-Pacific concept has gained increasingly wider acceptance. The Indo-Pacific Ocean Initiative that we tabled at the East Asia Summit last year is a development with considerable promise in that context,” he said, while referring to Prime Minister Narendra Modi’s speech in Bangkok last November.

Pointing out that India assumes membership of the UN Security Council next year as a non-permanent member, he said: “We look forward to seeking collective solutions to global challenges, including global recovery from the pandemic and reform of multilateral institutions”.

The Indian side, in its readout about the meeting, said the Ministers “called for a coordinated response to the challenges including financial problems emanating from the pandemic; need to share best practices to combat Covid-19; increasing the resilience of supply chains; and enhancing access to affordable vaccines, medicines and medical equipment”.

Japan’s Foreign Ministry said the Ministers welcomed “proactive efforts by other countries including those in Europe toward a “Free and Open Indo-Pacific”. Australian Foreign Minister Payne said “it was vital that states work to ease tensions and avoid exacerbating long-standing disputes, work to counter disinformation, and refrain from malicious cyberspace activity”.

Earlier, according to the US State Department, Jaishankar and Pompeo discussed ongoing “cooperation on topics of international concern”. They “look forward to the U.S.-India 2+2 Ministerial Dialogue later this year,” it said.

Jaishankar tweeted: “Began my Tokyo visit with a bilateral meeting with @SecPompeo. Pleased to see the progress of our partnership in so many fields. Will work together for stability and prosperity in the Indo-Pacific.”

Pompeo echoed the remarks in a tweet: “Productive meeting today with Indian Minister of External Affairs @DrSJaishankar. Together we are advancing U.S.-India relations, combatting COVID-19, and ensuring a secure and prosperous Indo Pacific for all.”

For all the latest India News, download Indian Express App.