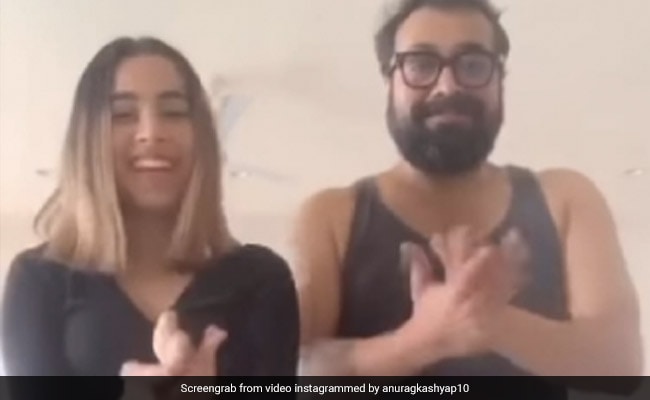 Anurag and Aaliya Kashyap in a still from the clip. (Image courtesy: anuragkashyap10)

Anurag Kashyap and his daughter Aaliya occupied a spot on the list of trends on Tuesday, courtesy their ROFL TikTok videos. The filmmaker, who rarely makes an appearance on Aaliya’s TikTok profile, decided to show his dance skills on the video-sharing platform on Tuesday. He took hilarious dance challenges with his daughter and shared glimpses of their fun-time on his Instagram stories. Sharing one of the videos, in which Anurag can be seen matching steps with Aaliya to a hip hop track, he wrote: “Omg! This Aaliya… Things that she makes me do” while posting another, in which he can be seen continuing the dance challenge, he captioned it: “And Aaliya refuses to let go.” Another video shows the father-daughter duo lip-syncing a fun conversation on TikTok. “I think this one was easier to do,” he wrote while sharing the clip. Aaliya is the daughter of Anurag Kashyap with his ex-wife, film editor Aarti Bajaj.

Anurag Kashyap recently released his film Choked: Paisa Bolta Hai on Netflix. The film, which stars Saiyami Kher in the lead role, is a fictional take on lives tipped over by demonetisation and shows how a middle-class family deals with money and marriage after demonetisation.

Earlier, in an interview with news agency PTI, Anurag Kashyap spoke about using demonetisation in his story and added: “When you are making a movie which is about money and marriage then demonetisation has to be a part of it. We wanted to use it as much as it was a part of a middle-class life.” Choked also features Roshan Mathew, Amruta Subhash and Rajshri Deshpande in pivotal roles.